By Alan Seymour
This month will see the gavel fall (albeit electronically) on a trio of particularly rare and intriguing modern Panerai wristwatches.

C omprising standout pieces from Panerai’s signature Luminor, Radiomir and coveted Mare Nostrum collections, all three watches in the Panerai Prototypes sale were only ever produced in small limited editions, however these particular examples are made even more desirable by virtue of each being the unique prototype to their respective limited editions.

In the competitive world of watch collecting – where even a simple line of dial text can double or triple a watch’s value – acquiring the prototype of an already sought after watch is akin to snagging the proverbial ‘Golden Fleece’. Generally, prototypes are retained by their manufacturers and never become commercially available, making such gilded horological ovine pelt normally impossible to come by.

Notably, its case is realised in eponymous Carbotech carbon composite, made using layers of thin carbon sheets and PEEK (Polyether Ether Ketone) polymer compressed together at high pressure, a lightweight, highly-durable and hypo-allergenic material perfect for a watchcase. Its dial is non-reflective pitch black in colour, thanks to a carbon nanotube coating, and provides maximum visibility to the electric-blue-lumed hands and indices. Whilst its semi-skeletonised and partly DLC (Diamond Like Carbon) coated movement boasts only four jewels (most time-only mechanical calibres have 17!) and tantalum-based ceramic and silicon construction, resulting in an astonishing 50-year service interval.

Produced in a run of 50 pieces – excluding the prototype, of course – this is the first Lab-ID to come to market, beating the general release. The prototype, which uniquely pioneered the technology included in the retail model, includes minimal lubrication and a 50-year warranty on the movement only.

A far more traditional piece, this watch is a heritage reissue from Panerai’s historically important achieves: a pièce unique Mare Nostrum PAMA0300, circa 2010.

The Mare Nostrum is something of a ‘unicorn’ to Panerai, said to be presented for consideration in 1943 to navy deck officers of Italy’s Marina Militare, initial production never made it past the prototyping stage due to external constraints brought about by the Second World War. These original examples were all though to have been lost forever in the years before Panerai was acquired by luxury-goods company Richemont née Vendôme. But in 2005 one emerged on the open market and Panerai’s then-CEO Angelo Bonatti managed to buy it back for the brand’s museum collection. Since then, Panerai has gone on to produce two faithful reissues of the original 52mm Mare Nostrum, one in 2010 and the other in 2015.

Bearing the reference number PRT MN52TI, this watch served as a prototype to the 2010 reissue (reference number PAM00300). It features a titanium closed-back case and is the only modern Mare Nostrum to feature the olive dial colour of its 1940s predecessor, differentiating it from the standard release PAM00300 and its steel open-back case and black dial.

Rounding up the sale is this prototype to 2016’s PAM00672 from Panerai’s Firenze sub-collection made to honour the company’s hometown, Florence. Housed in a 47mm stainless steel Radiomir case with sapphire crystal back, an engraved pattern incorporating shapes inspired by Florentine architecture and the city’s lily motif can be found throughout the case and movement – hand engraved onto the case and laser engraved onto the movement.

Unlike the version found in Panerai’s general catalogue, the prototype PAM00672 employ’s brushed case finishing and the beloved ‘California dial’ of half/half Arabic and Roman hour markers typically seen on the Radiomir watches issued to Marina Militare divers in the 1930s and 40s. All in all, this watch is a great example of the sort of gentrified military cool styling that Panerai (re)made its name for. 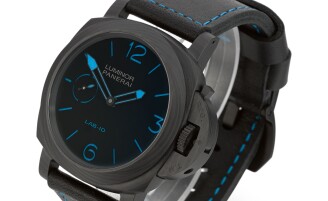