T his remarkable pair of ‘chef d’oeuvre’ by the famous Parisian seat maker Nicolas Heurtaut belongs to a set of 18th century furniture that was almost certainly offered by King Louis XV to his mistress, the Countess of Séran.

The sofas, which feature in the Important European Furniture, Sculpture, Works of Art & Paintings 16th–19th century in Paris on 28 November, are part of a complete set that also includes eight flat-back armchairs, an alcove sofa and a ‘lit à la polonaise’. Dated 1755, the furniture was originally used at the Château de la Tour in Normandy from the 18th century until the end of the 19th century, when the complete set was dispersed. It has remained in the same private collection since being sold at auction in 1965.

The richness and originality of the sofas perfectly illustrate the creativity and virtuosity of Heurtaut, one of the most famous seat maker and sculptors of the reign of Louis XV.

The sculptor, who studied at the Academy of Saint-Luc, practiced his art as early as 1742 in the workshops of Tilliard, Sené and probably Avisse and Saint-Georges, mastering all the subtleties of the rocaille style, which featured elaborate shell-like and rock-like motifs.

The outstanding feature of these sofas is their unique asymmetrical structure. The design had a two-fold purpose: It made it possible to place the pair of small sofas on either side of the set’s larger alcove sofa and also allowed the owner to position them on either side of a chimney, earning them the title “coins de feu”.

The possible provenance leads back to 1767, when the furniture appeared in a Louis-Michel van Loo painting of wealthy heiress Louise-Honorine Crozat du Chatel, Duchess of Choiseul. Following the disgrace of the Duc de Choiseul, part of his collection was auctioned in 1772 when it is believed certain pieces were purchased by Louis XV and appear later in his mistress Marie-Marguerite-Adelaide de Bullioud, the Comtesse de Séran‘s residence.

The Comtess was the mistress of Louis XV after the disappearance of the Marquise de Pompadour, the king’s official chief mistress. Belonging to the circle of Madame Filleul and the Marquis de Marigny, the Comtess aspired to join the entourage of the Duchess of Chartres and finally became Mistress of Dresses after death Of Louis XV, serving Madame Elisabeth, sister of Louis XVI.

The sofas feature in the Important European Furniture, Sculpture, Works of Art & Paintings 16th–19th century in Paris on 28 November. 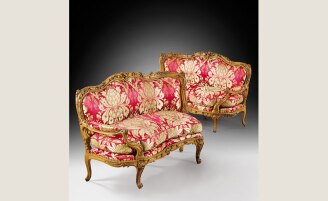