T he Mosaic Rooms opens its doors to the first ever show dedicated to Mohamed Melehi (b.1936) who is now regarded as the cornerstone of postcolonial Moroccan art and of modernism in the Global South. ‘New Waves’ platforms Melehi as painter, photographer, designer, teacher and cultural activist. As typical of curator Morad Montazami who approaches all the exhibitions he has worked on with an acute historical sensitivity, this show also tells the story of the radical Casablanca art school through previously unseen archival material.

Opening this Thursday April 11 at the Mosaic Rooms that has hosted some of the finest, small exhibitions dedicated to modernists of the Arab and Iranian world, the show is a must see for those keen to learn more about this period and the movements that shaped it.

Melehi’s colourful, geometric works came from a range of influences and inspirations – from Frank Stella to Op Art, and the wave motif embodied a symbolism that was both personal and political. One of those rare artists who was visually and aesthetically pleasing but also profound, Melehi’s colourful tributes to his native culture remain both an ode and a statement that needs to be seen to be fully experienced and appreciated. Make sure you catch the wave! 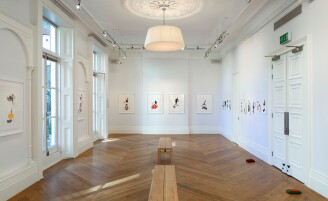