Napoleon and the Resistance of Pope Pius VII

Sotheby’s Medieval and Renaissance Manuscripts and Continental and Russian Books sale in London on 3 July features a volume from the height of the Napoleonic Wars. This volume records one of the most important series of communications to emerge from that conflict: that between the imprisoned Pope Pius VII and his secretaries of state, and Napoleon’s ambassador.

When the French occupied Rome at the height of the Napoleonic Wars, events proceeded rapidly. Pope Pius VII vocalised his opposition to this assault by excommunicating the French Emperor, but in the wake of this act of defiance one of Napoleon’s lieutenants saw a chance for advancement. He abducted the Pope, who was then exiled to Savona.

This volume relates almost day by day the events of 1808-1809 when the French occupied Rome and the Papal States, partly in order to prevent the English from continuing to trade there. General Miollis entered Italy in January, and by early February the pope was all but imprisoned in the Quirinal.

The correspondence is predominantly between the Pope or his secretaries of state and the ambassador Charles-Jean-Marie Alquier (1752-1826), who left Rome in February 1808; General Miollis, in charge of the French troops occupying Rome and General Radet.

The first entry in the volume, dated 6 January 1808, is a list of requests made to the Pope by the French, including rubber-stamping Napoleon's choice of cardinals; Pius reacted with inertia, marking the start of his passive resistance which caused the French such problems in Rome.

Pius's response via his secretary (dated 30 January 1808) states that he is "altamente sorpresa" (extremely surprised) and "profondamente addolorato" (profoundly saddened) by Alquier's requests, that he has done everything he can to assist "eccettuate quelle soltanto, che i suoi sagri doveri, e dettami della sua coscienza non gli permettevano" (having excluded only those that his holy office and the dictates of his conscience would not allow him to do).

The documents include printed proclamations, including Pius's condemnation of the invasion from February 1808, which Miollis tried to suppress, and another by the French banning the carrying of weapons. There is a copy of Napoleon's decree from 2 April 1808 in which he annexed Urbino, Ancona, Macerata and Camerino to the Kingdom of Italy, and his two printed decrees from 17 May 1809, in which he declares that Rome itself has been absorbed into the French Empire.

The following item in the volume is Pius's notice of excommunication of the French occupiers (10 June 1809, though not naming Napoleon himself). Pius then made an address to the people of Rome on 6 July as he was arrested by the French and the Quirinal was taken by force. The bulk of the volume pertains to 1808, providing a detailed portrait of the diplomatic actions of both sides during this troubled time.

The survival of this volume is noteworthy. Napoleon had the Vatican Archives removed to Paris between 1810 and 1813, though the files of Pius VII were somehow omitted from this programme; apparently they were buried in the gardens of the Vatican and recovered some fifty years later. 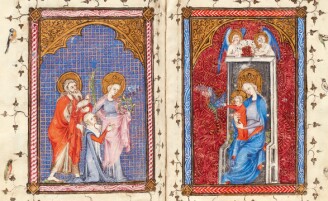 Past Auction
Medieval and Renaissance Manuscripts and Continental and Russian Books
3 July 2018 | 10:30 AM BST | London