At first glance, you might think this is a child’s toy, perhaps a tiny crane or a ship. But then your notice the blade, and you realise it is a miniature guillotine. It might look like ivory but the material is sheep bone. Why would anyone ever carve a small guillotine out of sheep bone? This macabre early 19th-century object was made by a French prisoner of war, one of an estimated 80,000 French soldiers interned in depots in Britain during the Napoleonic Wars.

The depots were cold and unpleasant but the prisoners were treated fairly well. At Dartmoor prison, inmates were fed one and a half pounds of bread and an ounce of Scotch per day as well as a dish of a half-pound of meat with greens or a pound of fish with potatoes. Prisoners took the bones and carved them into ships, domino cases, Spinning Jennies and curiosities like this guillotine. Inmates used their allowance, sent to England by the French government, to buy carving implements as well as pieces of rope or fabric. Their finished wares were taken to the local markets and sold, thus earning them a bit of money. Bored, tired, and broke, the prisoners nevertheless found the means to learn a craft and create objects of real artistry. The care and even pleasure the prisoners took in their work is evident in the details of their objects. Look closely and you will see little hearts on the fence around the guillotine. 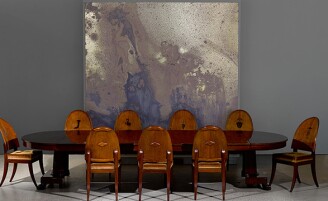