By Sotheby's
Sotheby's Japanese Fine Art sale on 14 May features a lacquered Suzuribako (Writing Box) by Shiryama Shosai, one of the most celebrated artists of his era.

A ppointed as Teishitsu gigein [Imperial Household Artist] in 1902 (Meiji 35), Shirayama Shosai (1853-1923) was one of the most celebrated artists of his time. With contemporaries of him that included Shiata Zeshin and Ikeda Taishin, Shosai co-founded the Japan Lacquer Society (Nihon shikkokai) in 1890 and contributed to the foundation of the Lacquer Department of the Tokyo Art School (Tokyo bijutsugakko) with the aim to both preserve and modernise traditional Japanese aesthetics.

As for all artists of that time, Shosai’s artistic career was profoundly affected by the political circumstances in Japan in the wake of Westernisation. In 1865, at the age of twelve, Shosai started his career as an apprentice in a workshop for sword accessories. However, due to the fall of the Tokugawa shogunate in the mid-19th century, demand for these accessories was decreasing, and the new government of Meiji would issue the Sword Abolishment Edict (Haitorei) shortly thereafter in 1876. Consequently, Shosai quickly shifted his career to lacquer at the age of seventeen and received a nine-year training in the maki-e technique under Kobayashi Kozan.

At the age of twenty-seven, Shosai joined the Kiritsu Trading Company (Kiritsu kosho kaisha), which had been established shortly after the 1873 Vienna World Fair due to the rising demand for Japanese art in the Western art market that also resulted in the emergence of Japonisme. As a commercial enterprise, the company employed artisans in all branches of the decorative arts to cooperatively produce high-quality products for the Western market. The company gave him the opportunity to work with leading painters, woodcarvers, metal workers and ceramic craftsmen and exhibit at international fairs. In 1890, he received a silver medal at the Universal Exposition in Paris and was appointed as professor at the Tokyo Art School (Tokyo bijutsu gakko).

One of the many European artists of that time that incorporated Japanese elements in their work was Gustav Klimt. One of his most recognisable works, The Kiss (1907-1908) was created during Klimt’s “Golden Period” and its powerful decorative representation on a golden ground resembles the composition of Japanese writing boxes such as this magnificent piece by Shosai.

The rarity and quality of Shosai’s works was the result of his perfection and determined dedication of only using tools and materials of the highest standard that often resulted in extravagant production cost. Within Japan, the official respect for Shosai and his works long transcended his death. For instance, The Emperor Showa (Hirohito) presented a lacquer box by Shosai to Queen Elizabeth II on her Coronation on 2 June 1953. Today, Shosai’s works are housed in the Bauer Collection, Royal Collection Trust (RCIN 39503), Museum of Fine Arts, Boston (11.10305a-b) and Rijksmuseum (AK-RAK-2015-4) outside of Japan. 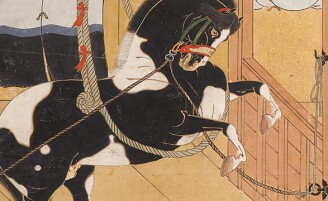