A s a cosmopolitan Jewish woman trained in Budapest, Kati Horna embraced photography as a tool for subsistence, political engagement, and creative expression. On view beginning 28 March, Fantastic Rediscovered: Rare Photographs from the Estate of Kati Horna brings together a carefully assembled selection of series and portraits that showcase her sophisticated artistic vision and understated sense of humor.

Michel Otayek is currently a PhD candidate at NYU’s Department of Spanish and Portuguese. He holds a Bachelor’s degree in Law from the Universidad Católica Andrés Bello in Caracas, and an MA in Art History from Hunter College in New York. His master’s thesis explored Kati Horna’s photographic practice during the Spanish Civil War, underscoring her involvement with the anarchist fringe of the conflict.

His research addresses the role of documentary practices in the articulation of political and artistic discourse, and the engagement of manuscript and print technologies in the production and circulation of culture in the Iberian world. He is particularly interested in the politics of collaboratively produced cultural artifacts, with special emphasis on illustrated periodicals and photo-books. He is currently working on his doctoral dissertation, which undertakes a comparative analysis of certain aspects of the photographic careers of Kati Horna in Mexico and Grete Stern in Argentina.

Parallel to his doctoral work at New York University, Otayek previously co-curated "Told and Untold: The Photo Stories of Kati Horna in the Illustrated Press." Exhibited at Americas Society in New York from 13 September to 17 December 2016, "Told and Untold" was the first exhibition dedicated to Kati Horna in the United States and a fully illustrated catalog is to be released 17 March. He is also at work on several projects involving other European-born female photographers active in Latin America during the postwar period, including Bárbara Brändli and Thea Segall. 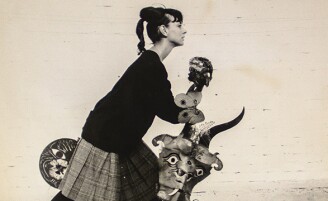