By Sotheby's
Independent watchmaking represents some of the most cutting-edge and innovative creations in the world of horology. Sotheby’s Important Watches auction (4 June, New York) is offering a dynamic selection of timepieces from independent firms, including Richard Mille, H. Moser & Cie and F.P. Journe. Here, discover five exceptional examples from the last two decades and learn the stories behind the companies who created them. 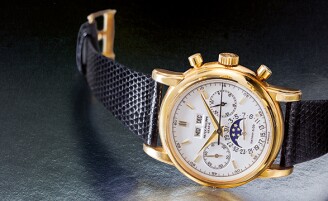 (VIEW LOT)
Laurent Ferrier perpetuates the outstanding nature of Swiss horology. Ferrier completed training at the Geneva Watchmaking school and spent nearly four decades with one of the most prestigious manufacturers, Patek Philippe. After his final role as Patek Philippe's Creative Director, Ferrier founded his own brand dedicated to his distinct vision of watchmaking.

(VIEW LOT)
Richard Mille began working in the watch industry in 1974 and founded his eponymous firm in 1999. The company has since become one of the most successful independent watchmakers in the industry and continuously innovates with new materials and technologies inspired by the automotive and airspace industries.

(VIEW LOT)
Born in Bolton, England in 1970, Roger W Smith was advised by his father to attend the Manchester School of Horology. He met his mentor Dr. George Daniels in 1987 who presented his iconic Space Traveller pocket-watch to the students at that time. Roger then said, "Suddenly, my life's purpose was crystal clear – though its path was less defined." After his encounter with Daniels, Roger aspired to become a watchmaker who would create stunning timepieces, exquisitely built and finely finished using nothing but his bare hands. This would become "The Daniels Method." Smith later became Daniels's only apprentice, and following that, he also managed to master 32 trades of British watchmaking to become worthy of collaborating with the great master himself.

(VIEW LOT)
H.Moser & Cie is powered by entrepreneurs who have excited the industry with their unique and daring visions rooted in traditional haute horology. Their emblematic models, such as the present lot, reflect all their qualities of modern elegance and traditional mechanical excellence.

(VIEW LOT)
F. P. Journe unveiled his first collection at the Basel Fair in 1999, adopting the spirit of "Invenit et Fecit," Latin for "invented and made." The firm’s mission has always been to create highly complicated precision chronometers. Each invention is conceived to solve a horological problem and achieves an unparalleled level of accuracy within an elegant and finely finished work of art.