W ith almost 30,000 visitors and 500 events across the UAE, there is an element of March madness around ArtDubai and the surrounding week of activities. Each year becomes busier, with more offerings and unmissable programming. This year, there were also two more venues to take in: Dubai Creek’s Jameel Arts Centre which opened last November, and the Al Serkal-based, South-Asian non-profit Ishara Foundation, which was launched during ArtDubai. Furthermore, local art and culture programming ran from end of February, beginning with exceptional offerings from the Abu Dhabi Music and Arts Foundation, continuing with the opening of Sharjah Biennial on 7 March and coming to a breathless stop at the end of ArtDubai on 23 March. This was the longest stretch yet of events, and if you caught everything you must have had a body double!

For me, highlights of the biennial included presentations on Pakistani artist Anwar Jalal Shemza and celebrated Lebanese artist Huguette Caland. Shemza’s geometric works particularly resonated in view of my newly-published book Geometry and Art in the Modern Middle East which was launched at the Sothebys DIFC headquarters on 18 March. Throughout both the fair and the biennial, I was struck by the increasing use of geometry within both current and earlier art practice.

By Friday 15 March, events around the fair were in full swing, and of special interest was the discussion at the Jameel Art Centre by Sultan Sooud Al Qassimi, on overlooked Arab modern masters. But of course there was, concomitantly, the pull of the Sharjah Architecture Triennial which addressed environment and ecology in sustainable architecture design and urban planning. Did I say a body-double was needed? The next day Sikka art fair, with its widely-spread local appeal, opened in Al Bastikiyya, making the evenings in this beloved quarter even more lively than usual.

By the Sunday, Sotheby’s had kicked off its own series of events with its celebrated Collectors Art Quiz Dinner, ‘artfully’ hosted by none other than Middle East Chairman Edward Gibbs. This was followed by our blockbuster travelling exhibition of no fewer than five categories of goods: Islamic Art, Orientalists, Arab and Iranian Twentieth Century Sale highlights, Sotheby’s Diamonds, and Watches – the latter achieving a whopping $3m auction result on 24 March.

As we celebrate our 275th anniversary this year, Sotheby’s spared no detail in ensuring the best of presence and presentation. Of special significance is our global partnership with Citi Private Bank, Art: Beyond Borders, that launched on 18 March, and brings together two formidable organizations aligned in serving clients and art patrons around the world. 2019 is also a very significant year for the Private Bank as it marks the 40th anniversary of its pioneering Art Advisory & Finance business, so it seems the perfect time for our collaboration, which will include more co-hosted events and thought leadership to educate and inspire art lovers. Keep an eye out for the next exciting development.

Citi Private Bank regional heads Mark Mills and Samir Raslan joined Tad Smith, Sotheby’s Worldwide President and CEO in marking this occasion, and guests at the cocktail reception enjoyed the large array of exhibits that ranged from diamond-studded Vacheron Constantin watches to world-class, cutting-edge design in diamond creations, as well as luminous Orientalist paintings and historic Islamic objects. Last but not least, a sublime Huguette Caland and a monumental Mahmoud Sabri gave a foretaste of some of the works on sale in London on 30 April as part of the Twentieth Century Arab & Iranian art sale.

There was barely time to catch the shows of Emirati artists at the Al Serkal (Hasan Sharif at Galerie Isabelle van den Ende, Mohammed Ahmed Ibrahim at Lawrie Shabibi) before one could run to the art fair itself, as ever bustling and vibrant as ever in its 13th edition, with many favorite galleries and artists present. An industry landmark, ArtDubai serves on many fronts: a hub for the regional art market, a networking opportunity, and a place to experience current art discourse via the Global Art Forum. On all counts, the fair did not disappoint this year

Over 28,000 visitors mingled with a record 130 institutional representatives and the 500 events across the UAE meant a 25% increase in programming. A new segment ‘UAE Now’ ensured that the fair preserved its reputation as the global meeting point for the region’s art scene. Personal favorites included Heba Amin’s Portrait of Woman as Dictator at Zilberman Gallery, Sepand Danesh’s StoneHendge at Dastan’s Basement, as well as a seminal work by Reza Aramesh at Leila Heller Gallery. There were new and exciting artistic experimentations, as well as popular choices which have a strong following amongst regional buyers. While formal figures were not published, it was understood that the fair performed strongly, and that the next edition – already scheduled for 18-21 March – is bound to be hotly anticipated. 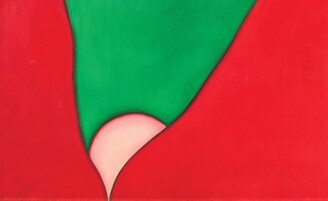