Maranello Masterpiece: The Flowing Lines of This Mid-Century Ferrari Are Automotive Art

By Forest Casey
A look into why the Ferrari Lusso is regarded as the brand’s most beautiful Berlinetta.

Ferrari fans have their own name, their own language and lore, and even their own amusement park. Back when car audio was dominated by compact discs, Ferrari even released an official album, composed of only the exhaust notes from their finest engines. Ferrari aficionados have inherited Enzo’s passion, then, yet even the most passionate of Ferrari fans tend to agree that, of all the designs overseen by Ferrari himself, the Ferrari 250 GT/L Berlinetta Lusso by Scaglietti is arguably the most beautiful. 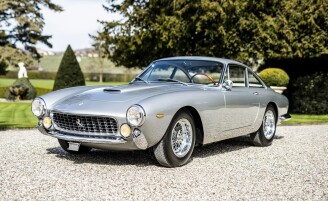 And so, with RM Sotheby’s announcing a spectacular, site-based, summertime auction in the Palazzo Serbelloni, in Milan, and with this matching-numbers example from 1963 emerging as an early highlight, we thought it would be altogether fitting and proper to execute a deep dive on the design of one of the most elegant grand touring models in prancing horse history.

What makes the Lusso so immediately appealing to Ferrari fans can be appreciated in the photograph above. If its Pininfarina design could be distilled into two words, they would be: Perfect proportions. Every line, from front to rear, resolves in an entirely majestic manner. The twin front headlights mirror the twin lights at the rear. Any exterior chrome adds to the overall effect, rather than serving as mere decoration; the twin buffers (or overriders) underneath the headlights are particularly noteworthy for their sculptural shape. It is almost unbelievable to realize they were made with practicality in mind; essentially serving as scuff guards to protect the Lusso’s hand-formed Scaglietti body shell.

The subtlety of this Modena-made masterpiece can be seen in this close-up detail of its rear tail. An exercise in executing subtlety, the slightly up-turned trunk lid, when combined by the flat, almost Kammback-shaped tail, both suggest an understanding of aerodynamics that was not at all universal among automakers when this model was originally released in 1963. The refined tail treatment continues with the combination rear brake lights and turn indicators, cutting down the number of total lights on the trunk from four to two; the capstone on a minimalist design.

The rear surfacing of this fabulous Ferrari is also worthy of note. A close look at the character line above the rear fender reveals a strong design language, flowing from front to rear. The so-called C-Pillar, which can be seen between the rear windshield and pop-out rear ¾ window, is a line so delicate and tapered that calling it a “Pillar” is almost insulting. No matter the manufacturer, even with the aid of futuristic carbon fiber, due to safety regulations, modern sports cars will likely never surpass this classic design.

All the exterior chrome on this example is tastefully paired with its subtle Grigio Argento paint. With help from a team of marque experts around the world, including veteran Ferrari historian Marcel Massini, as well as Italy-based Bacchelli & Villa and Autofficina Bonini, it was determined that this example originally wore this shade over a complimentary Nero Franzi (NR 1) interior, and from 2009-2011, this example was treated to a painstaking restoration, ensuring all details have been returned to new.

Underneath the front-hinged bonnet cover, the exposed engine bay shows the evidence of this well-researched restoration. Twelve cylinders are on display, as one would expect; Tipo 168 U is this potent powerplant’s internal designation. Devotees will decode that number and identify this short-block as a Columbo 3.0-litre V-12, with outside-plug ignition and single-cylinder porting. This legendary engine was shared with several of Ferrari’s greatest creations, including the 250 Testa Rossa and California Spider. Moreover, since its comprehensive engine overhaul, this example only shows 3,500 km on its odometer; meaning the next owner is free to experience the immediate throttle response and orchestral exhaust note from one of Ferrari’s signature engines.

Finally, we have a sculpture-within-a sculpture: The famous Ferrari badge, framed by the so-called egg-crate grille in chrome. This aesthetic is still being referenced on modern Ferrari grand touring cars today; just look at the laser-cut front grille of the Ferrari Roma, for instance. But for many devoted Ferrari fans, no grand tourer will ever top the mid-century elegance of the Lusso.

A thrilling work of art, then. Much like artistic works, only a limited number were built; this is the 65th of a mere 350 examples of 250 GT/L models ever made by Ferrari. For an extensive gallery of images and a full history file for this spectacular example, please click this link. And if you happen to be in Milan, Italy on 15 June 2021, this example will be on full display at the Palazzo Serbelloni, where you can register to view this V-12-powered work of hand-made sculpture firsthand.