'Made in Japan': Basquiat Viewed With an East Asian Twist

By Julie Anne Sjaastad
A pop culture darling of the 1980s, Jean-Michel Basquiat (1960 – 1988) was a meteoric star rising on the New York art scene, and during his quick ascent to international fame, Basquiat had frequently visited Japan, where he held many solo and group exhibitions. This year, the legendary artist returns to Tokyo in spirit as the Mori Art Center Gallery organizes the first-ever comprehensive retrospective of Basquiat’s work in the country – adding an East Asian twist to the narrative and examining the links between Basquiat and Japan during the height and excess of its boom years.

C onsider the following: As the elevator takes you up to the observation deck of Roppongi Hills Mori Tower, it is simultaneously taking you back three decades. Upon arriving at the 52nd floor, you are greeted with a skyline view of Tokyo, which prompts the imagination to conjure visions of the city from the 1980s. Next to the observation deck is an adjacent art space, in which Basquiat’s works, such as Untitled (1982), One Million Yen (1982) and Self-portrait (1985), decorate its walls. These are works that reflected New York’s fast-paced, chaotic reality and the unabashed pursuit of commercialism.

Turning back the clock to the end of the 1970s, the art world at the had just entered a postmodern period, in which the U.S. and Europe were witnessing a redefinition of Expressionism. Artists were rejecting the mainstream and turned to their own environment, in search of something, a new and different form of art that already existed. Basquiat’s career began in spray paint, with poetic aphorisms and symbols all over the city under the tag SAMO© (standing for “same old shit”) together with his friend, Al Diaz in the late 1970s. In June of 1980, Basquiat held his very first public exhibition in The Times Square Show, a group exhibition held in an abandoned building on 41st Street and Seventh Avenue.

Basquiat did not receive a formal or conventional art education, instead studying art by visiting museums such as the Metropolitan Museum of Art and the Brooklyn Museum. He learned from Old Masters like Caravaggio, from the Art Brut of Jean Dubuffet, and from Abstract Expressionists like Jackson Pollock and Willem de Kooning. From these ideas, Basquiat would develop his cache of paintings. His poetic juxtaposition of crudely drawn figures, handwritten phrases, and symbols suggested a renewed style in Expressionism.

Similar to New York, Tokyo in the 1980s was enjoying rapid economic growth which spurred on its art market. As Japan approached the height of its go-go period, Tokyo’s culture would soon become synonymous with sleek technologies, lightning-speed information, and cutting-edge fashion. During this time, Basquiat often visited Japan, having held six solo exhibitions and ten group exhibitions in the country. The artist was not only inspired by New York, but also by Tokyo, where he began incorporating Japanese words and phrases as well as Japanese characters into many of his works.

One example from the current exhibition is Onion Gum, painted in 1983. The absurd inscription “Onion gum makes your mouth taste like Onions” makes viewers smile at the wit, but also draws them into the multilayered symbolic world of Basquiat. At the center of the canvas is small figure standing on top of a head, holding two snakes. Surrounding the head are the words “SNAKE” and “SERPENT.” The phrase “MADE IN JAPAN” in the top right of the canvas draws the attention of viewers. The painting is part poetry, part farce – repeating nonsensical slogans as a reference to advertisements and commercialism.

Another example of wordplay comes in Basquiat’s 1982 painting One Million Yen. The titular phrase is scrawled on a dark red background, with the words “ONE” and “YEN” circled, while below are repetitions of the phrase “VERSUS PORK.” It leaves viewers scratching their heads as to the connections between these words and the painting’s title.

One highlight that should not be missed is Untitled (1982), one of the Basquiat’s greatest paintings. Depicting a skull-like head in oil stick, the painting was sold at a Sotheby’s auction in 2017 to the Japanese collector, Yusaku Maezawa for $110.5 million dollars, topping the record for an American artist’s work at the time. Untitled represents every bit of Basquiat’s characteristic techniques – the integration of wordplay and image, and the layering of collaged material and line, form and color. It’s impossible to ignore. Untitled demands and deserves attention.

With about 130 works on view, “Jean-Michel Basquiat: Made in Japan” presents the first-time opportunity to see a comprehensive exhibition of Basquiat’s art in the country, but more significantly it offers insight on the ways language and commercial images can shape notions of cultural identity especially in context of Japan. The exhibition runs through 17 November. 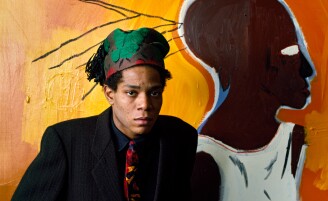