London to St Ives: A Journey Through British Art

A massed over a period of thirty years, London to St Ives: A Journey Through British Art perfectly encapsulates a moment in the history of art where our native avant-garde wrestled with the traumas of the post-war period. Including many never-before-seen-at-auction works, the paintings, prints and sculptures featured within the sale trace a dialogue between the realism and human focus of London and abstraction and landscape in the small fishing village of St Ives. Viewed together, they exude a deep appreciation for the finest examples of British creativity and tells the story of Britain's cultural history.

In mid-century Britain, London – bomb-ravaged and starving but still the capital city of a global empire – had a serious rival in a small fishing village at the westernmost tip of the country. It is perhaps impossible to say which was the true centre of avant-garde art. In both London and Cornwall, artists wrestled with the question posed by German philosopher Adorno – how could one write poetry after the horrors of Auschwitz? For London-based artists such as Frank Auerbach, Lucian Freud and Reg Butler this resulted in an intense and forensic re-examination of the human figure and human relationships.

In St Ives, on the other hand, artists such as Patrick Heron, Peter Lanyon and Terry Frost turned to abstraction – Modernism's attempt to filter out much of modernity – in a search for the eternal, ineffable and universal rooted in an ancient landscape untroubled by man.

Taking a closer look at the artists in the sale, it is evident that the war had a direct impact on their lives: Peter Lanyon, the RAF mechanic; artilleryman Alan Davie and tank trooper Alexander Mackenzie; Terry Frost and Roger Hilton, the commando prisoners of war; Reg Butler, the conscientious objector and architect-turned-blacksmith; merchant seaman Lucian Freud and child refugee Frank Auerbach; Michael Kidner, demobilised from the Canadian Signals corps at the age of twenty-nine.

London to St Ives: A Journey Through British Art brings together a body of works created in Britain over this past-changing period, and to celebrate the sale please join us for a gallery talk by renowned art historian Michael Bird on Sunday 11th June. To reserve your place please email britart@sothebys.com or telephone 0207 293 6424. 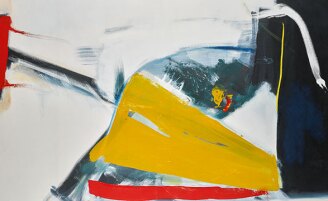