Leda and the Swan

B ronzes do much to decorate cabinets. One should have a few well-preserved antiques and some fine, well-repaired modern ones.” Dezallier d’Argenville’s instructive advice published in 1727 in Le Mercure de France shows how important it was that any decent art collection include bronze statuettes. By the 1690s, the arts were beginning to favour somewhat lighter themes than ancient mythology, but in the first quarter of the 18th century, France was enthralled by love stories involving the gods.

Ovid’s Metamorphoses provided sculptors with a wealth of subjects to sculpt: scenes that were erotic, but also proper. Even so, representations of Leda’s seduction by Zeus, who came to her as a swan, were rare in France in the first quarter of the 18th century. Souchal counts only four depictions of the subject during the reign of Louis XIV: a terracotta bozzetto by Pierre II Legros (never made into a full-scale work), a marble piece by Simon Hurtrelle (known only from an etching), Jean Thierry’s reception piece from 1717  (Louvre), and Corneille Van Cleve’s bronze of which the best examples are in Dresden (Staatliche Kunstsammlungen) and the Louvre.

As well as reductions of models taken from Antiquity, the great Italian Renaissance sculptors and Giambologna’s subjects from Florence, bronzes began to show more originality and became works in their own right. In Paris, sculptors like Philippe Bertrand, Robert Le Lorrain and Corneille Van Cleve were to elevate the art of bronze statuettes to new heights.

French foundries developed greater skill in the casting of statuettes, and certain sculptors like Van Cleve or Le Lorrain — whose families had been goldsmiths and who knew how to work with metal — are said to have participated in casting their own works. An inventory taken after Van Cleve’s death mentions his Leda and other models designed to be turned into bronzes and sold. He had some of them delivered to his home “to be displayed to the public and sold more easily.” These include two pairs of great mythological lovers, Diane et Endymion and Bacchus et Ariane, of which the Boston Museum of Fine Art has two copies. They share some similarities with our bronze, not just their theme, but also the multidimensional composition, the swirling drapery and sensual poses.

Robert Le Lorrain took an interest in the market for bronze statuettes while still a pensionnaire at the French Academy in Rome, much to the dismay of the director, who commented bitterly to the royal superintendent: “Mr Le Lorrain has reason to be pleased with his stay, given that he has worked solely for his own interests. He has sent most of the models he made to Paris. I thought they were designed solely to demonstrate his abilities, but have learned that they are to be sold to foundries to be cast in bronze. He will be able to sell them more easily in Paris than here.” Such statuettes were a major part of his work. They include his Andromeda, a version of which is in the Louvre, and his groups Vertumne et Pomone (Honolulu Museum of Art) and Vénus et Adonis (Mobilier National, Paris).

The breath-taking beauty of this anonymous French bronze owes a great tribute to Florentine sculptors such as Massimiliano Soldani-Benzi, Giovanni Battista Foggini and Giuseppe Piamontini, whose seductive bronze casts have always been highly sought-after. To our knowledge, the Leda and the Swan presented here is the only known bronze of this model. The Mannerism of its sophisticated composition is probably inspired by a lost painting by Michelangelo, once mentioned in François I’s collections and known by Etienne Delaune’s engraving. The remarkable quality of the cast with its subtle brown patina, superb chasing and finishing, the large size and the eminently sensual subject make this bronze an exceptional rediscovery. It is a credit to the Parisian sculptor-founders active under Louis XIV and the Regency and whose works were to be found in the most prestigious European collections of the 18th century. 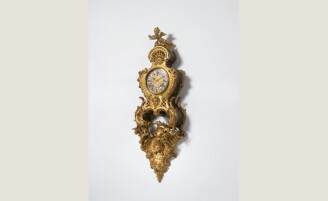