‘My father began life as a Pre-Raphaelite painter; when past thirty he fell under the influence of contemporary French painting. Instead of finishing a picture one square inch at a time, he kept all fluid, every detail dependent upon every other, and remained a poor man to the end of his life…’ - W. B. Yeats, Autobiographies

With such celebrated children, John Butler Yeats’ own achievements as an artist have often been overlooked. It was not until 50 years after his death that the first exhibition devoted solely to him took place – at the National Gallery of Ireland in 1972 – and since then only a few exhibitions on him have been staged. The collection represented here – from the oils to the significant quantity of sketches – therefore provides us with an opportunity to reassess JBY’s talents as an artist, chiefly a portraitist. Further, the works offer fascinating glimpses into life within the Yeats household, charting his children’s development from infant to adulthood, as well as capturing some of the artists, poets, actors and intellectuals who associated with the family and together led the Irish Revival.

JBY never sought public recognition and it was only late in life that his artistic career achieved wider reputation. Self-promotion was never his strong point; the only exhibition of his work during his lifetime was arranged by another artist, and even this was shared with another painter. This lack of a greater profile was in no small part due to his personality. As his biographer William Murphy wrote, ‘If ever an artist needed an agent, it was John Butler Yeats. With no gift for organisation and no head for business, he resisted offers of assistance from family and friends and stubbornly went his own way’ (quoted in ‘The Artist and the Man’, The Drawings of John Butler Yeats, 1987, p.11).

JBY’s issue was that he was a man of many talents driven by a great, wandering intellect. He was not only an artist but a gifted writer, speaker and thinker. He elevated the ideal of Art above all else and because he held it so high, he never felt he could achieve it, and therefore was plagued by doubts in his abilities. What is more, as Art’s disciple, he was famously averse to profiting from it. A Mrs Alexander Sullivan of Chicago on visiting JBY in New York heard him talk ‘of art and its mission’. Mrs Sullivan retorted: ‘Sir, your patrons would tell you that you had not to consider your mission, but your commission’ (W. Murphy, Prodigal Father: The Life of John Butler Yeats, 1978, p.136).

JBY’s career as an artist began in the 1860s. He shocked his family and not least his new wife, Susan, when he abruptly decided to abandon a promising career in law (throughout which he was often sketching in the courts) to dedicate himself to the life of an artist. In 1867, he left Dublin for London, taking his two young children, Willie (William Butler Yeats) and Lily (Susan Mary Yeats) with him, and enrolled at Heatherley School of Art. His early career is marked by a Pre-Raphaelite influence, seen in works such as Pippa Passes (National Gallery of Ireland, Dublin). The early sketches of his children offered here also reveal a sensitivity to Dante Gabriel Rossetti’s curvilinear softness. At one stage, Rossetti expressed interest in JBY’s work and invited him to visit. Yet typical of JBY’s insecurities, he turned down the offer. No doubt such a connection would have been useful to an artist finding his way in London. JBY mused later in life, ‘I admired Rossetti very much and wished to postpone my visit to some time when I should think better of my own work.’ (quoted in Murphy, op. cit., p.76).

In the early 1870s, JBY went to study at the Slade School of Art under Edward Poynter, introducing a more direct and naturalist approach, leading him to depart from what he called the ‘sensuous’ world of Rossetti. As he continued to develop he came to the increasing realisation that his greatest skill lay in portraiture, which for a man who delighted in conversation, intellectual discovery and human nature, was a perfect direction.

Through the 1870s JBY developed a strong interest in the portraiture of George Frederick Watts, notably his Hall of Fame series depicting celebrated Victorians of the period. It is appropriate that it was to Watts’ portraits JBY was drawn given he himself was to embark on a similar series when commissioned by Hugh Lane in 1903 to paint Ireland’s most prominent cultural figures, now largely housed in the NGI. It is for this commission and his celebrated portraits of the likes of John O’Leary, George Russell (A.E.), George Moore, Maire Nic Shiubhlaigh that Yeats is best known. The writer Susan Mitchell, writing in New Ireland in 1918 gave a wonderful description of what it might have been like to sit for the artist. ‘With his sitters he carried on conversations, largely monologic, advancing on his canvas with great strides… putting on touches with the ardour of one who would storm a fortress, retreating as eagerly….talking enchantingly all the time, his whole nature in movement.’

The success of JBYs portraits lies in the sense of familiarity that comes from them, a sense of understanding and searching within the sitter’s personality. ‘The best portraits will be painted where the relation of the sitter and the painter is one of friendship’ JBY remarked, and this was a guiding principle of his portraiture. This is perhaps no more keenly felt that in the pencil sketches he consistently made of his family and friends, which have a great sensitivity and familiarity to them. It is with the pencil that JBY is most at ease, and he greatly enjoyed the sketching process. ‘A sketch is far better – reveals more of a man portrayed than the best photograph – since it gives not merely the facts but a comment. One feels instinctively from the way the pencil or brush is handled what manner of man is the sitter. The artist does this quite unconsciously - otherwise it would not be done rightly.’ (JBY quoted in Murphy, op. cit., p.204)

It is also quite probable that JBY had encountered the work of Whistler, notably his drypoint etchings of individual women from the 1860s onwards. Included within the sale is a fine group of sketches of solitary women, reclining, seated, sleeping or reading. They share a strong connection with Whistler’s etchings and show an expert command of line – confident and expressive.

By the turn of 20th century, JBY had returned to Dublin from London. Now in his early sixties, he had finally risen to prominence, chiefly through the success of his shared exhibition with Nathaniel Hone organised by Sarah Purser in 1901 and through the Hugh Lane commission. He was as ever, by the force of his personality, a central figure within society and a magnet for artists and intellectuals to gather around. By this time, his children were well establishing themselves within Dublin cultural life – Willie through his poetry and the Abbey Theatre, Lily and Lolly through Dun Emer and later Cuala Press and Jack through his illustrations and paintings. Overseeing it all and actively participating when called upon was JBY. Yet JBY was never one to be satisfied and still he was always on the search for the next commission. So it was that in 1907, when the opportunity to travel to New York emerged, JBY impulsively seized the opportunity, showing remarkable endeavour at the age of sixty-eight. It is a trait one sees echoed by his son Jack and the intensity he committed to his paintings in the last decade of his life.

JBY was never to return to Ireland, and saw out the last fourteen years of his life in New York. There he again found himself in the centre of its artistic circles. The sketching continued endlessly and perhaps most famously of all, his last great painting was commissioned – a self-portrait. If ever a painting summed up the man, this is it – eleven years later up to his death, he was still tinkering with it: restless, energetic, ever enquiring. To the very end, as George Russel (A.E.) aptly commented towards the end of JBY’s life, he possessed a humanity which delights in humanity. 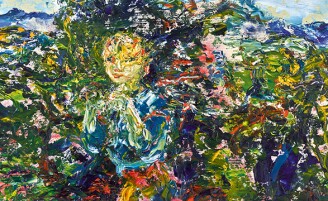