Horror Legend Joe Dante on The Mummy, Film Posters and Growing Up a Monster Kid

F rom Piranha and The Howling to his hit movie Gremlins, Joe Dante's films have become cult favorites for their dark humor and distinct, cartoon-like aesthetic. As seen in the director’s numerous commentaries, such as in Trailers from Hell – the web series he launched in 2007 – Dante is a lifelong movie buff who attributes his passion and style to early Hollywood. “I have a fondness for the films I saw as a kid because that's when our first impressions are formed,” Dante told Sotheby’s. His work often incorporates cinematic Easter eggs and references to past films. “I love to place what I'm doing in the context of what has come before.” Just in time for Halloween, Sotheby’s is offering an extremely rare poster for Karl Freund’s 1932 The Mummy which is poised to reclaim its title as the world’s most expensive film poster. The iconic Universal horror picture has been particularly formative for Dante, whose latest project, an episode for the new anthology film Nightmare Cinema, will debut later this year. Ahead, Dante reflects on The Mummy, classic cinema and the entrancing beauty of a great movie poster. 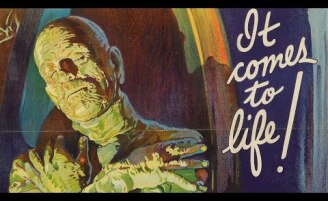 Can you explain the phenomenon of “Monster Kids?”
Those of us baby boomers who discovered there were others who also loved horror movies have come to be grouped under the sobriquet “Monster Kids.” Many of us thought we were pretty much alone in our interests until Forrest J Ackerman's Famous Monsters of Filmland magazine made its way to supermarket shelves in 1958. And when a second issue appeared with a letters column, we finally had a forum. Suddenly a slew of imitation monster magazines competed for our attention. Even Hollywood noticed, and the late 1950s played host to an increased number of sci-fi and horror films of both A and B budgets.

Your work frequently references classic films, whether it’s a certain motif, the name of a character or an actor from that era making an appearance. How have early horror movies influenced your work and career?
All the movies I've ever seen have influenced my career. It's true that I've hijacked a lot of movie lore into my films because I love this stuff. I love to work with people I enjoyed while I was growing up, and most of my friends in the business feel the same way. As far as horror films go, my influences range from James Whale, Mario Bava, Val Lewton, Roger Corman and Roman Polanski to less-known names like Roy William Neill and Michael Reeves.

What was your connection to movie posters when you were a kid? What are some of the film-related items you collect?
I was a huge movie poster fan and bought a lot of original posters from Theater Poster Exchange in Tennessee for what would be considered a pittance today. Over the years I've collected a trove of posters, but the problem always is: how and where do you display them? Most of these items are squirreled away in hopes that someday you'll have enough real estate to put them out. I also started collecting 16mm prints during the 1960s, and between myself and several other collectors, we have hundreds of now obsolete prints which we house at the Motion Picture Academy in LA, along with our 35mm collections.

You started out drawing and wanting to be a cartoonist. As someone who has always been quite visually oriented, why is The Mummy poster so special?
I don't think I laid eyes on The Mummy poster until about ten or so years ago – it was thought to have been lost. It's certainly one of the most striking examples of early 1930s advertising and far outclasses the original treatments for Frankenstein and Dracula.

Studios hire illustrators far less than they once did. Do you think illustrated film posters are a lost art?
Obviously the decline of illustrated posters in the 1970s and 1980s was a blow to the medium. Looming photos of the actors only work if the actors are iconic, and even the most popular aren't that compelling after a while. But I've been happy to see a resurgence of interest in illustrated posters in recent years, especially within artfully arranged compositions that invoke the feeling and impact of the movie itself. 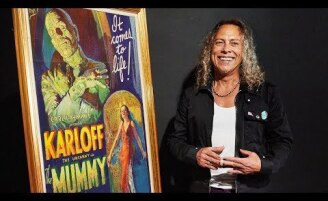 Describe your experience of seeing The Mummy for the first time.
Like most of my generation I first saw The Mummy in 1957 on Shock Theater, a syndicated TV package of early Universal and Columbia horror films. The first scheduled programs were Dracula, Frankenstein, The Mummy and The Wolf Man. The first two were early talkies released sans music scores. The Mummy was the first one with a complete music score, which even today makes it seem more modern than the others. Plus, the movie is based on the actual 1922 expedition that opened Tutankhamun's tomb and the supposed deaths that followed, which made it a bit more like an early reality show.

"Genre films have always been subversive vehicles for political messages under the guise of entertainment."

Can you speak to horror movies as a vehicle for political and social messages?
Since movies began every era of upheaval has been accompanied by a surge of so-called horror films, reflecting the anxieties of the time. Genre films have always been subversive vehicles for political messages under the guise of entertainment. Pick a war, and then check out the horror films that accompanied it. I've taken advantage of this myself, more than once or even twice.

You wanted to remake The Mummy in the 1990s – but why did you prefer to do a contemporary film versus a period one?
In the 1990s I was ensconced at Universal and tried to interest the powers that be in an update of The Mummy. I thought it was a clever contemporary take on the concept, and so did Steven Spielberg, who urged me to take it to the head of the company, Sid Sheinberg. But Sid read it and said, no, it should be “a period picture, like the first one” – which was made and set in 1932! So my Mummy didn't see the light of day, but after lots of money was dropped on later attempts by George Romero and Mick Garris, it ended up as a Raiders of the Lost Ark clone with a Mummy in it. And it made a fortune, so what do I know?