Jenny Saville and the Beauty of Individualism

J enny Saville’s Juncture is a staging of pure spectacle in paint. Alongside other examples in the artist’s famous series of early monumental nudes – a body of work that includes the record breaking Propped (1992) and Shift (1996-97), and the gargantuan triptych Strategy (1993-94) – this work is not a quiet painting but a theatrical entity that demands attention. Considered alongside her rare charcoal work on paper, Untitled, we are presented with a snapshot of a decisive moment in Saville’s seminal early oeuvre.

Created at the mid-point between her staggeringly successful degree show in 1992 and her inclusion in Charles Saatchi’s notorious Sensation, the pinnacle of the YBA phenomenon, in 1997, Juncture is a quintessential expression of Saville’s principal subject: the female body. Reproduced in every major publication on Saville’s work to date and exhibited widely – this painting is among the most recognisable of her career.

For Saville, the realisation of her core subject came as an epiphany when studying abroad for a term at the University of Cincinnati. Her experiences there would trigger a real turning point for her as, aside from attending art classes, she also had access to a whole curriculum of theoretical studies. Having been an academic student at school, Saville jumped at the chance to flex her intellectual muscle and elected to take a course on Écriture Féminine in the department of Women’s, Gender and Sexuality Studies.

"There is a thing about beauty. Beauty is always associated with the male fantasy of what the female body is. I don’t think there is anything wrong with beauty. It’s just what women think is beautiful can be different. And there can be beauty in individualism."

Jenny Saville in conversation with David Sylvester, The Independent, 30 January 1994

The course proved to be a revelation; it introduced her to the concept of patriarchy and brought to her attention the lack of the female voice within the history of art. By the end of the term, and with her feminist beliefs now firmly cemented by the writings of Hélène Cixous, Luce Irigaray and Julia Kristeva, Saville resolved to incorporate feminist perspectives into her paintings. On her return to London, work began on the series of paintings that launched her career and brought her to the attention of Charles Saatchi. 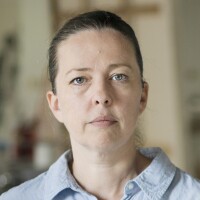 Juncture's towering form at once calls to mind the classical examples of Titian and Ingres, the unsentimentalising gaze of Lucian Freud, and the abstract technicality of Willem de Kooning. Saville’s technical mastery at rendering the human form is truly exceptional, and this painting is undoubtedly one of her finest examples. In this work paint assumes qualities and visceral textures that lead you to believe in possibility of reaching out and touching real human flesh. Juncture celebrates the female body in a way that squares up to a social-media fixated present and its obsession with images of a bodily ideal that propagates ageless perfection and petite symmetrical proportion. Indeed, even though this painting was created 15 years ago, it is as relevant and vital today as it was in 1994.