Coming to auction for the first time, Jean-Michel Basquiat’s 1982 masterwork Versus Medici will star in New York’s Contemporary Art Evening Sale in May. 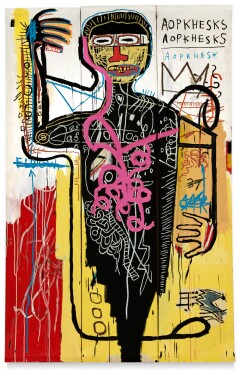 
A n extraordinary work executed in 1982, when the artist was just 22 years old, Jean-Michel Basquiat’s Versus Medici will star in the Contemporary Art Evening Auction in New York on 12 May, where it will be offered with an estimate of $35–50 million. Versus Medici is among Basquiat’s most forceful visual challenges to the Western art establishment, in which the young artist boldly crowns himself successor to the artistic throne as established by the masters of the Italian Renaissance. The artwork has remained in the same distinguished private collection since 1990; it was previously in the collection of Stephane Janssen, an early champion of Basquiat who acquired it from Larry Gagosian on a visit to Basquiat’s studio in 1982.

Versus Medici is an early, prime masterwork from the artist. Basquiat completed the work in 1982, the same year as the record-breaking Untitled, which sold at Sotheby’s in 2018 for $110.5 million, and shortly after his breakthrough inclusions in the Times Square Show in 1980 and New York New Wave at PS1 in 1981.

Featuring the artist’s signature visual language, Versus Medici confronts a key cornerstone of Western art history, the Italian Renaissance, a movement associated with achievement and enlightenment, as defined by the works of Leonardo, Michelangelo, Raphael, Botticelli and others. Although painted at the inception of Basquiat’s career, the artist ambitiously wages war with the history of art and not only assets his own place within this history, but also crowns himself a successor to these Renaissance masters.

Basquiat was well-versed across art history, and a range of influences can be seen throughout the work – namely the anatomical complexity of early Leonardo drawings and the triptych format of the painting’s construction. Executed on three joined canvases, even the structure of Versus Medici draws upon Basquiat’s extraordinary familiarity with centuries of tradition by echoing the time-honored format of the tripartite altarpiece, and references the religious and political power that were associated with them.

In Versus Medici, Basquiat takes command of the Western art narrative, and crowns himself, the son of immigrants from Haiti and Puerto Rico, as artistic royalty, taking on the old masters and positioning himself as the almighty successor to centuries of artistic genius. With great intensity and visual force, and acutely aware of the exclusion of artists based on race from institutional and critical consideration, Basquiat used his position at the periphery of the art establishment to forge a new and highly referential visual language.

Having voraciously visited the Brooklyn Museum and the Metropolitan Museum of Art in New York, Basquiat recognized a glaring absence of Black representation within the art historical canon. In the present work, Basquiat positions himself as the heroic opponent to European history’s greatest dynasty of patronage and influence, confronting the canon they helped to shape by presenting his own potent masterwork. In its incendiary title, Versus Medici testifies to Basquiat’s ultimate aim of establishing a place for himself within the canon – and in doing so, he boldly declares his arrival as a brilliant, young artist into a new canon that would be forever transformed by his paintings.

‘Versus Medici’ is Basquiat’s ultimate reckoning with art history – an extraordinary work executed when Basquiat was only 22 years old in defiance against the artistic establishment.

Ever the iconographic alchemist, here Basquiat absorbs the legacy of Western art history and reshapes it to his own purposes. Through this painting, the Medici become a stand-in for the power systems of the art world at large, as figureheads within for a powerful system of art patronage that was echoed in the power structures of Basquiat’s own art world in 1980s New York. Recognizing that for centuries, every art historical movement was legitimated by systems of exclusion, Versus Medici presents a searing and heroic figure to oppose that narrative – while simultaneously aligning the young Basquiat as radical successor in the new pantheon of art history.

This powerful stance is eloquently captured in Basquiat’s use of the Greek term “Aopkehsks,” which could refer to the Hellenization of the Egyptian pharaoh Amenhotep, a prominent and idealized king, or to the practice of apotheosis, the elevation of the human to the realms of the divine. In either interpretation, Basquiat positions his ferocious figure as a vessel of divine will. Read alongside the symbol of the three-pointed crown – one of Basquiat’s defining and most recognizable motifs – there is little doubt the figure in the painting is depicted as an avenging hero of art history.

Traveling Exhibition for Versus Medici 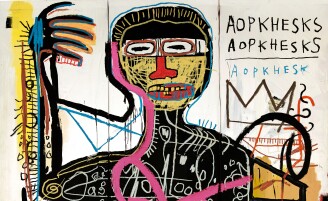