It's Alive! Frankenstein at the Morgan

F or centuries, a solitary character has haunted readers around the world: the so-called Creature from Mary Shelley’s Frankenstein; as images of the Creature were first circulated in 1819. Ever since, the character has been disseminated and appropriated into every possible medium - from comic books to art objects to movie memorabilia.

Did I request thee, Maker, from my clay; to mould me man ? did I solicit thee; from darkness to promote me?

The international success is no surprise given the tale's integration of classic themes: love, loss, humanity and, of course, fear. Closing January 27th, a special exhibition at the Morgan Library and Museum in New York City investigates the history of an icon. 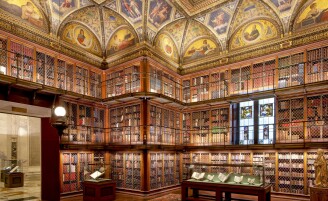 Much like Karl Freund’s The Mummy – one of the first great horror films – Shelley’s Creature is largely a stand-in for humankind’s greatest fears. When examining the many abridged interpretations of the Creature, a realization transpires: the author’s moralistic novel, a work that explores mankind’s capacity to love, has been lost in translation – or better yet – lost in reproduction.

For this reason, the Morgan has set to remedy the issue of Frankenstein’s proliferation. The library presesnts It’s Alive! Frankenstein at 200, in celebration of the 200th anniversary of Shelley's original publication. In the show, curators bring together a myriad of objects related to Shelley's beloved work: the author's original writings, Frankenstein as a first edition; in addition to artifacts inspired by the novel, such as paintings, prints, movie posters, comics, and scripts.

The exhibition traces the story's origins, causes for its lasting success, and the book's popular culture reinterpretations - or as the Morgan Library writes the “spinoffs, sequels, mashups, tributes, and parodies.” It’s Alive! Frankenstein at 200 includes the notable painting, Nightmare by Henry Fuseli, which features a sleeping woman, plagued by sleep paralysis, and dreaming of horror.

The painting possibly resembles Shelley herself. After all, a premonition for the creation Frankenstein came to her in a dream:

I saw the pale student of unhallowed arts kneeling beside the thing he had put together. I saw the hideous phantasm of a man stretched out, and then, on the working of some powerful engine, show signs of life, and stir with an uneasy, half vital motion. Frightful must it be; for supremely frightful would be the effect of any human endeavour to mock the stupendous mechanism of the Creator of the world.

The Morgan Library investigates a fearsome icon with this special show, opportunistically timed for the Halloween season. As a surprising twist in the plot, our own humanity is revealed.