By Sotheby's
From 29 August – 13 September Sotheby’s will hold an online auction of limited-edition bottles of Ornellaia’s 2016 Vintage featuring designs by artist Shirin Neshat to support the Solomon R. Guggenheim Foundation.

T o celebrate the 11th edition of Ornellaia's Vendemmia d’Artista programme, the winery invited Iranian artist Shirin Neshat to interpret the character of the estate’s 2016 wine, “La Tensione” (Tension), and customise a series of 111 large format bottles – 100 Double Magnums, 10 Imperials (6L) and one Salmanazar (9L) – as well as a special label to be included on one 75cl bottle in each case of the vintage. Sotheby's online auction comprises 11 lots, featuring 9 of the 10 Imperials and the unique 1-of-1 Salmanazar.

Every year since the release of Ornellaia 2006 in May 2009, a contemporary artist has created a site-specific work of art and a series of limited-edition labels as part of the Vendemmia d’Artista programme. Earlier this year, Ornellaia announced its support of the Solomon R. Guggenheim Foundation as part of a three year partnership which will see the expansion of the museum’s innovative programme, Mind's Eye, developed by its education department in 2008 to help individuals who are blind or have low vision experience art through all their senses. The final sum raised to support Mind’s Eye through the sale of these exclusive large formats will be announced at an Ornellaia event at the Peggy Guggenheim Collection in Venice on the evening of 13 September, soon after the online auction draws to a close.

Shirin Neshat’s concept is centered around the theme of wine as a catalyst for social sharing, a life force that should be “enjoyed during our brief time on earth”, in the words of the 11th-century Persian poet Omar Khayyam whose poem is inscribed as calligraphy over the surfaces of female faces, hands and bodies. The artist’s poetic visual language creates contrasts between the softness of the skin and the graphic nature of the text.

Earlier this year winemaker Axel Heinz, Estate Director at Ornellaia since 2005, presented Sotheby’s Wine with his 2016 vintage, which is set to reinforce Ornellaia’s reputation as one of Italy’s most important wines. Opposing forces of ripeness and firmness were the inspiration for its namesake, “La Tensione” – first impressions on the nose are blackberry, cassis, and cedar, whilst the palate is silky with fine tannins and intensity on the finish, which will ensure excellent maturing in a cellar, for at least two decades. 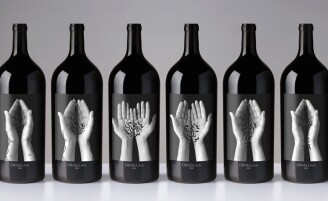