T he drawings offered in this sale showcase the wide range of styles and subjects that constitute the field of Old Master Drawings. From figure and composition studies, designs for prints or silverware to independent works made to be sold, these drawings all have a different function or purpose and tell their own unique story.

A closer look at a drawing allows you to enter into a dialogue with the artist, to understand his or her creative process and ultimately reveals the inner workings of their mind. This is the aspect of drawing that excites and delights the most, as it leads you on a journey to the finished masterpiece educating you about each artist and their individual style.

A vital part of artistic training took place in the Academies where artists were encouraged to draw from life. The red chalk drawing of a reclining male nude in a landscape highlights the importance of studying the model to perfect the varying contortions of the anatomy and the movement of the human figure (lot 523). This bold depiction of a male nude in a landscape may have been preparatory for a painted commission but it clearly demonstrates the teachings taking place in the Academy and the emphasis on carefully observing the human form.

Another important function of a drawing was to set out the preliminary design for a print or engraving. The black and white chalk study of Hercules resting by a fountain demonstrates how drawings were often indented or incised in order to transfer the image in the printing process (lot 544). If you look closely at this drawing you will see that the contours have been marked with a sharp instrument, so the lines clearly stand out and the outlines of the design can be easily transferred.

As a final example of another category of drawing we have the independent work produced by popular demand for an enthusiastic clientele who wanted souvenirs of their travels abroad. These picturesque gouaches by the Venetian artist, Giacomo Guardi, were extremely popular with travelers on the Grand Tour who wanted to take home a snapshot of their time abroad. These two works are both signed and inscribed by the artist, demonstrating the ever-changing function of a drawing, from preparatory studies which were rarely signed, to highly finished works for the consumer market where the artist clearly wished to be recognised and accredited for their craft (lot 532).

The sale invites both seasoned Old Master Drawings collectors and newcomers to the field to come and take a closer look at works on paper and with drawings starting at £100 it presents a fantastic opportunity to take some of these beautiful pieces home.

The history of watercolours in western art dates back to the time of Albrecht Dürer (1471-1528) and since then artists from across Europe have turned to the medium. Despite this international history, it was in Britain that the art form flourished most, building pace in the second half of the eighteenth century and reaching a resounding crescendo with Turner and his early nineteenth century contemporaries.

One of the great fascinations of early British watercolours and drawings is their deep-rooted connection with the environment in which their makers lived. Focusing on human nature as well as the natural world itself, with its vast landscapes on the one hand and its minute details on other, it is clear that, more often than not, watercolourists chose to look upon their surrounding with great intensity. Another wonderful aspect is the very portability of the medium itself. Pencils, paper, chalks and raw watercolour pigment are all light-weight and so are perfect for the intrepid traveler. Indeed, many artists from the field were extraordinary travelers, their journeys made even more remarkable when one reads about the appalling state of the roads, both in Britain and further afield.

The Old Master and British Works on Paper Online sale represents this connection between travel and painting well, for it contains views taken in Italy, Switzerland, Germany, France, Spain and British Isles. Particular highlights are S.H. Grimm’s view of Caernavon Castle, North Wales (lot 590) and Francis Towne’s view near Lake Albano, Italy (lot 596). Grimm, who was Swiss but lived in Britain for much of his life, made this large-scale watercolour in 1777. This was an early date for a professional artist to be taking an interest in Wales and the region, which would become very popular with artists of the next generation, was at that moment largely unexplored.

Grimm has embellished this sheet with a lengthy inscription on the reverse. He wrote ‘above Caernarvon Castle taken on the Spot by S:H: Grimm - 1777. - NB. this drawing was taken in very thick cloudy weather, in clear weather / there are many more Mountains, with [sic] show themselves in the distance, with were envelloped [sic] in Cloud and Fog.’ This superb note gives us so much information and crucially affords today’s viewer an opportunity to look inside the artist’s mind.

The Francis Towne is a lovely example of the artist’s interest in light, shadow and line. Towne is considered to be among the most avant-garde and original draughtsmen of the eighteenth century, and the present sheet, which was executed on the spot while on his grand tour of Italy (1780 to 1781), is rare. It has remained in the same private collection since 1940.

Watercolours come in all shapes and sizes, some are conceived as ‘finished’ exhibition works, designed for the walls of the Royal Academy or the Society of Painters in Water-Colour, while others are rapid sketches – made by the artist purely for him or herself. This sale also includes some high-quality drawings – where the artist has turned to pen and ink, red chalk, or simply pencil. Two particularly strong examples are George Michael Moser’s seated male nude (lot 622) and Sir Francis Grant’s sketch of a lady on horseback. 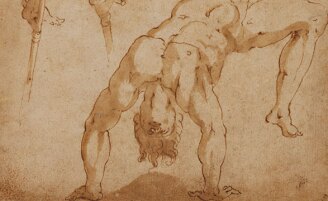