Hong Kong – Sanyu’s figure drawings are an embodiment of the artist’s creativity and imagination. These works opened the door of modern art to new vistas, and propelled the artist to the ranks of the great masters. The men and women portrayed under Sanyu’s brush are taken from the settings of the everyday, but under the artist’s unique facilities of observation and imagination, they are endowed with a new aesthetic. Using soft and dynamic lines, the artist captures transient flashes of inspiration.

As one of the few Chinese members of the School of Paris, Sanyu became a representative figure for Eastern culture. In the late 1920s and early 1930s, the French writer Henri-Pierre Roché and Dutch composer Johan Franco served as Sanyu’s artistic managers, respectively. The records from that time reveal that the marketing materials designed for the artist most highly celebrated his nude figure pieces.

Compared to the other artists who had studied and stayed in Paris, although Xu Beihong and Lin Fengmian created no small number of nude figure paintings after returning to China, they could not separate those creations from the Western tradition, and leaned against it as an anchor. Sanyu’s nude paintings, on the other hand, arose from a more natural instinct; they embody the free, virtuosic spirit of xieyi and are full of humour and fragments of everyday life. Sanyu was not shouldered with preaching. Especially in his works on paper, through capturing the human body from various perspectives and angles, his presentation (rather than ‘representation’) showcases the confidence of his swift and steady brush, which paved the foundation for his later human figure oil paintings.

During the early years of modern Chinese art, the attitudes toward nudity in art were harsh and it was difficult to make progress. For example, from 1917 to 1927, the exhibition of figure paintings and the use of nude models at the Shanghai School of Fine Arts caused artist Liu Haisu to be publically denounced as ‘the scum of academia’, a ‘demon of the art’, among other titles. The school was shut down, and the artist was sought by the government for arrest. Eventually, Liu fled to Japan for refuge. Later, expatriate artists Xu Beihong and Lin Fengmian returned to China and promoted nudity in art, and they, too, became subjects of similar backlash. On the contrary, Sanyu, who at the time was living in France, was able to freely use nude as his main subject.

Sanyu’s nudes are not only an expansion of the subjects of Chinese painting, more importantly, they represent a true intersection of the East and West, of the traditional and the modern, of xieyi and xieshi, of the fashionable and the classical, of the individual and the times. When he was creating them, his works were already eliciting reverberations from both the East and West. In China, the celebrated poet Xu Zhimo was the artist’s most loyal and well-known supporter.

Among the contemporary masters is Egon Schiele (1890-1918), also known for his sketches of nude figures. The quality of toughness in the outlines of his figures contain notes of an Eastern aesthetic. The lust portrayed under his brush often verge toward the violent, as a kind of catharsis of the artist’s fury toward life. These characters, next to Sanyu’s soft lines which convey strength, his subtle humour toward the erotic, are set into an interesting interplay. Schiele’s extraordinary talent was cut short when the artist passed away at a young age, and he and Sanyu were never able to meet. But from the similar natures of their works from that period, the two artists most certainly were peers, held in equal regard.

On the 50th anniversary of Sanyu’s passing, Sotheby’s is honoured to present “Ineffable Beauty”, the largest auction of Sanyu’s works on paper ever held. The historic sale’s 22 works have been safeguarded in the same European private collection since 1966, and will be revealed to the public for the first time, marking a rare opportunity to view and acquire works of exceptional quality and provenance. 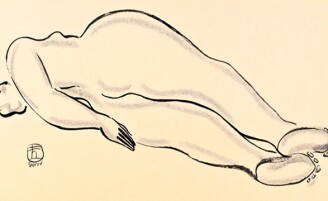