Following the success of last autumn’s auction Howard Hodgkin: Portrait of the Artist, which captured the imagination of thousands of visitors and bidders across the world, Sotheby’s presents a second auction of the artist’s work. Howard Hodgkin: Working on Paper (London, 12 June) will reveal the scope, diversity and ultimately the great passion Hodgkin had for working on paper.

Alongside stage designs for the Royal Ballet and Mark Morris Dance Group, commissions from projects such as the 2012 Olympic poster and book covers for his friends Julian Barnes and Susan Sontag, the auction will include a significant proportion of dazzling prints from the 1960s up to some of the last works he produced. Every print in the sale is an Artist’s Proof, retained by Hodgkin in his personal collection.

Following the auction, the proceeds will fund a complete museum collection of Hodgkin’s graphic work that is fully accessible for the public to see and enjoy, as well as supporting a new edition of the artist’s Catalogue Raisonné, which will feature 189 prints and many unique works on paper.

On Sunday 10 June at 3pm, Hodgkin’s printmaker, Andrew Smith, will give a gallery talk ‘The Journey of Making: Howard Hodgkin Working on Paper’. Please contact us to reserve your place by emailing modbrit@sothebys.com or calling +44 (0) 207 293 6424

Please note that the content below contains pre-sale estimates from the October 2017 sale Howard Hodgkin Portrait of the Artist. For full results from that sale click here

A Personal Portrait of Howard Hodgkin

Explore more from The Art of the Season 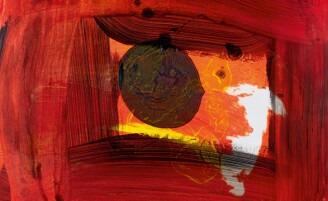