How Hall Chairs are Making a Comeback

NEW YORK – Collectors love hall chairs. And crests, mahogany and tradition are making a comeback. Hall chairs were originally used as seats in a house’s main hall to accommodate those waiting to enter into the more intimate spaces. Crafted out of solid wood with straight backs, hall chairs were placed against the walls.

A set of six George II mahogany hall chairs, circa 1750. Sold for £17,000 in May 2015 at Sotheby's London in Property from the Estate of Mary, Duchess of Roxburghe.

In addition to looking beautiful flanking a console or a commode in the entryway of a house, hall chairs are also incredible historical artefacts. Since hall chairs occupied a prominent position in any home’s entryway, they were often decorated with the family’s coat of arms and motto. This interesting feature allows collectors to trace the history of their chairs.

A hall chair with crest, to be offered at Sotheby's New York on 17 October in Collections: European Decorative Arts. Estimate $4,000–6,000.

Many of the crests are highly fantastical featuring imaginary creatures and pseudo-Latin or French mottos. These chairs are highly adaptable to all types of décor because they are often simple in form but decorated with playful crests or even in some cases japanned chinoiserie decoration.

A pair of George I black-Japanned and Chinese black and gilt lacquer hall chairs, circa 1720,
with late 18th/early 19th century modifications. Sold for $50,000 in October 2012.

While hall chairs are still produced today, they began in the mid-18th century. The first designs for such types of chairs appear in Thomas Chippendale’s 1962 Director, but they were first called "hall chairs" in another design book: Robert Manwaring’s The Chair-Maker’s Real Friend and Companion, from 1962. Chippendale and his contemporaries were innovating furniture design to match social and architectural customs of the 18th century, which restricted the flow of guests through the house based on social status. While the chairs are firmly embedded in their 18th-century roots, the way they wear their history on their backrests keeps them always interesting for modern collectors and decorators.

A set of six William IV carved mahogany hall chairs circa 1832,
by Robert Lawson and Robert Farmer of Gillows, Lancaster. Sold for £46,850 in 2010. 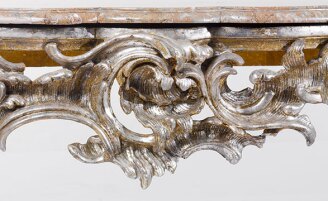