A t first glance, Mark Hogancamp’s Saving the Major appears to depict two valiant soldiers in the thick of combat. But this is not World War II, and while the mud on their boots is real, these figures are entirely plastic. Rather this is an expertly crafted scene from Hogancamp’s 1:6-scale town called Marwencol, which has become his refuge after surviving a vicious hate crime in 2000. Then 38, Hogancamp went for a drink at a local bar in Kingston, New York, where he still resides. During a casual conversation with a group of five men there, Hogancamp happened to mention that he enjoys wearing women’s shoes and nylons – when he left, the five men brutally attacked him. Having incurred severe brain damage, Hogancamp spent nine days in a medically induced coma and woke up without any memory of his life prior to the assault.

As he retaught himself how to live through multiple forms of therapy, Hogancamp created his own emotional outlet: Marwencol, a fictional Belgian town set in World War II, meticulously constructed from dolls and found objects in Hogancamp’s garden. Hogancamp and his world were the subjects of the 2018 Steve Carell-fronted film, Welcome to Marwen. Hogancamp began documenting the handmade town with his camera, and his resulting images, one of which is being offered in Sotheby’s Photographs auction (5 April, New York) reveal his cinematic eye and undeniable gift of storytelling. Hogancamp spoke to Sotheby’s about overcoming adversity through his unique art and his plans to go from his little town to the big screen. 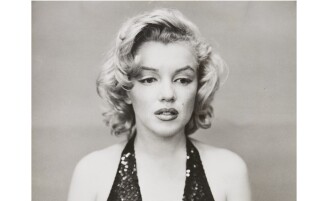 How did you come up with the idea of using found objects and creating Marwencol?
Since I was a kid, I've loved miniature scenes, and I built many dioramas. After the attack left me feeling as though I was being kicked off the planet, I wanted to build my own world that only I would understand. The first building I constructed using scrap wood was the "Ruined Stocking" Catfight Club. Then I built two other buildings and considered it a town. It took me almost two weeks to come up with its name, and by combining my name with two others, I came up with "Marwencol."

Drawing from your personal experience, can you speak to art’s healing and restorative powers?
When my caregiver went back home to Washington state, and I was told [after my 40-day stay in the hospital] that my Medicaid funds had run out, so I no longer had my therapies – speech, physical and cognitive – I felt broken and worthless. That's when I created my own world. When I was shooting a scene, I never considered my photos to be art – art, was the furthest word from my mind. I had the intensity of a traumatic brain injury survivor striving to get back what was taken from him. I needed to rid myself of the hatred and anger that I felt in the early years of my recovery.

Before the attack you were in the US Navy, and you were also an illustrator and carpenter. Do you feel like your former interests and professions influenced Marwencol, even subconsciously?
The six years that I had spent in the U.S. Navy had vanished the night of the attack, and when I was building the town (before it became "Marwencol") I could not document it by drawing. That's when I turned to my 35mm Pentax K1000. Through determination, I have gotten back what was selfishly taken from me, and that's the ability to illustrate from my imagination. So, I do not film things as much as I once did.

Can you speak to the cinematic quality of your photographs?
The cinematic nature of my photos comes from my love for movies that I’ve had ever since I was a kid. I like setting up a scene, shooting it and editing it like a movie in my mind. Almost every time that I go out to capture a scene, I take on the challenge of shooting something new.

How do you feel about the exposure of your story through books, films and gallery shows?
Everything that has happened to my little folks and I has been so surreal. Seeing as they're the celebrated actors and actresses who are in the photographs, I, being their manager, am grateful to have made them famous on film.

What does it mean to you to have your work go up for auction?
I took Saving the Major for a “to the rescue” themed photo contest organized by a 1:6 scale club that I'm a member of. It was the first photo contest that I have ever entered, and I won first place! So that particular photo has special meaning to me.

Looking into the future, do you think you’d ever create another town?
In the future, I'd really like to make a short film. I have vintage female uniforms from World War II that I want to put on film, for example an Army nurse/officer's uniform, Russian uniform, Coast Guard uniform and Lt. Commander, USN, uniform. I just have to find the actresses. I think I'm phasing out putting doll-figures on film and working my way up to making a real motion picture.