Fred Astaire's Gift to Ginger Rogers, by Hollywood's Jeweller to the Stars

By Samuel Hug
Among the highlights of the Sotheby’s Fine Jewels sale in London on 11 December is a beautiful gold letter-watch reputedly given to Ginger Rogers by her dance partner Fred Astaire.

A n unusual gold letter is one of the highlights of the upcoming Fine Jewels auction, on 11 December. By Hollywood’s original jeweller-to-the-stars, the letter is sealed with red enamel and delivered ‘By hand, to Feathers, all best love – Fred’.

Pry the seal open gently with the thumb, and the envelope springs open. Inside is a watch, its brushed gold face inscribed with a name in black enamel. The name is Flato.

Flato is a name now unknown to most – he is not listed by Marilyn Monroe in her performance of Diamonds are a Girl’s Best Friend in the musical, Gentlemen prefer Blondes, and his name appears nowhere in the modern-day luxury landscapes of Place Vendome, Bond Street or Rodeo Drive. And yet, in an extraordinary career spanning over six decades, Paul Flato was Hollywood’s very own jeweller to the stars - a visionary, gifted and charismatic designer, who counted Joan Crawford, Merle Oberon, Paulette Goddard, Vivien Leigh, Greta Garbo and Marlene Dietrich among his clientele.

His jewels articulated a number of diverse influences, from 18th century floral diamond sprays to industrial late Deco to contemporary surrealist trends, all infused with a sense of levity and humour, as well as a commitment to impeccable craftsmanship. By the time this watch was produced, Flato had established himself in New York with a $20,000 loan from Cole Porter, moved to Hollywood, launched Fulco Verdura’s career in America, and dabbled in estate jewellery with a young, then-relatively unknown wholesale diamond salesman named Harry Winston. He was also becoming deaf, and with his characteristic good humour and ingenuity, adapted the diagrams for the sign language alphabet into jewels, enabling his clients to spell out hidden messages in golden hand motifs.

Flato’s letter addressed to ‘Feathers’ from Fred hints at the provenance of this piece– the legendary on-screen dance duo, Ginger Rogers and Fred Astaire. Ginger Rogers (1911-1995) was born Virgina Katherine Mc Math in Independence, Missouri, and got her start on the vaudeville stage after winning a Charleston dance contest in 1925. Her career took off when she was cast in George Gerswhin’s Broadway musical Girl Crazy, which led to her first on-screen roles in 1929. Her first pairing with Astaire was in the 1933 film Flying Down to Rio, alongside Gene Raymond and Dolores Del Rio. Astaire had had various dancing partners in his already established career, but Rogers’ ability to retain her acting abilities and comedic timing as she danced immediately impressed him, and an enduring partnership was born.

Rogers’ stage name Ginger was already a nickname in itself, deriving from her young cousin’s inability to pronounce her real name, Virginia. Her nickname of ‘Feathers’, however, has its origins in perhaps her most famous dance routine with Fred Astaire– the Oscar-nominated Cheek to Cheek from the 1935 musical Top Hat. Rogers sought a gown that would move beautifully with her as she danced, and asked RKO’s head costume designer Bernard Newman to design for her a dress of pure blue, ‘…like the blue you find in paintings of Monet…with myriads of ostrich feathers’.

It was only on the day of filming that Fred Astaire and director Mark Sandrich saw the dress for the first time, and both immediately declared it to be hideously ugly. As they rehearsed the scene, the feathers stuck to Astaire’s face and clothes, and flew off as they danced, covering the floor. Astaire and Sandrich grew increasingly exasperated with the dress, but repeated attempts to convince Rogers to wear anything else fell on deaf ears – she was adamant, and the row escalated until Ginger threatened to walk off the set unless she could wear the dress. Fortunately, they relented, and the dress stayed. The resulting footage proves her excellent judgement, however – the dress moves beautifully as she dances, lending an exquisite fluidity and lightness to her already faultless choreography, extending every movement of her body.

As a gesture of apology after their row, and perhaps as a grudging admission of defeat, Astaire gave Rogers a gold charm shaped as a feather, and the name ‘Feathers’ stuck thereafter as an affectionate epithet for his onscreen partner. Rogers cannot have been too irritated by her new nickname, as in 1939 she turned to Flato to design for her a pair of gold and diamond brooches extravagantly modelled as ostrich plumes.

Rogers’ onscreen partnership with Astaire spanned 33 onscreen dance routines across ten films, delighting audiences worldwide. In addition to her dancing abilities, however, Rogers was also a talented actress in non-musical roles, keen to define herself in her own terms independently from Fred Astaire. When she accepted the Academy Award for her role in the drama Kitty Foyle in 1940, it was again Paul Flato who designed her floral jewels.

These years were also the peak of Flato’s fortunes as a jeweller. He was generous with his credit, and his glamorous clients slow to pay. His finances in a tight situation, Flato’s fame also worked against him, as his store was targeted in an armed robbery in 1941. A downturn in the economy as America entered the Second World War made things even worse, and Flato filed for bankruptcy in 1943. Finally, investigations into Flato found that he had been pawning client’s jewels in order to keep his ailing business afloat, a habit that landed him twice in the infamous Sing Sing penitentiary over the following decades.

Nevertheless, Flato’s natural faculty for creating witty, conceptual jewellery stuck with him through his turbulent life. He finally settled in Mexico City, where he re-established his jewellery business in 1970. His later jewels are characterised by richly textured gold work, and the incorporation of unorthodox materials such as skeletonised Peso coins and brass bells used by the indigenous Mexican community in ceremonies for the Virgin of Guadeloupe. He spent these latter years of his career as a prominent fixture on Mexico City’s social scene, much loved and patronised by the city’s elite. He eventually retired to his native Texas, where he passed away in 1999, surrounded by his family.

This charming letter-watch is a true time capsule of Hollywood’s golden age – a moment where Hollywood’s most celebrated dancing duo crossed paths with the original jeweller to the stars. 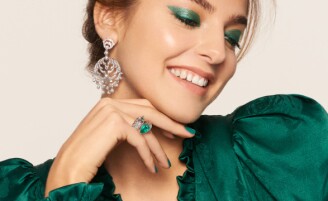