As the collection of financier and ambassador Felix Rohatyn comes to auction, Roger Cohen remembers the man who always found the middle ground.


A lways, there was the twinkle in his eye, and with it the feeling that Felix Rohatyn was seeing a little further than the rest of us, across the sweep of time. The financier who rescued New York from bankruptcy in the 1970s had escaped Europe as a teenage boy, his Jewish family in flight from the Nazis. He knew the fragility of even great fortunes, and of civilization itself. This knowledge guided his work. It informed his conviction that a balance was needed between the pursuit of profit and the public good. It’s rare for a financier to be able to say he saved the city that made him rich.

His Upper East Side Manhattan apartment had an old-world charm. It always struck me as a bridge between the Europe he had been forced to leave and the America whose post-war opportunities he seized. The frenzy of New York abated in the quiet elegance of the Rohatyn home. Old Master paintings, such as Canaletto’s Venice, a View of the Grand Canal Looking North Towards the Rialto Bridge, and Impressionist works, such as Pierre Bonnard’s 1924 painting La Chevelure D’or, adorned the walls while Rohatyn, ensconced in an armchair, would dissect the latest political folly, his purring expositions punctuated with wry humour. 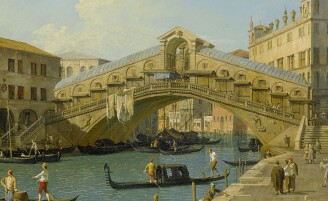 Having reached New York at the age of 14, after a two-year family odyssey that included stops in Morocco and Brazil, Rohatyn attended Middlebury College in Vermont. He landed a summer job at the Lazard Frères & Co (now Lazard Ltd) in 1949. At ease on two continents and multilingual, Rohatyn was a natural fit for this international financial house. André Mayer, another transplant from France, took him under his wing. Apart from a two-year stint in the army in the 1950s, Rohatyn would stay at Lazard for four decades. Resourceful and relentless, and a master broker in the field of mergers and acquisitions, he earned the sobriquet of “Felix the Fixer”. He was a solution finder, a forger of synergies. He could save corporations and, as it turned out, cities too.

“I get called when something is broken,” Rohatyn told the Associated Press in 1978. “I’m supposed to operate, fix it up and leave as little blood on the floor as possible.” Europe had been broken, awash in blood, when his family fled in 1940. And so, averting the worst became a lifelong principle. A fundamental pessimism undergirded Rohatyn’s creativity.

He loved to make deals, but fixing Avis or ITT was not enough. Rohatyn was inspired by the example of Jean Monnet, the French financier and diplomat, who laid the foundation of what would become the European Union and so saved Europe from its repetitive suicides of the first half of the 20th century. Monnet’s genial idea, shared with Robert Schuman, was to merge the French and German steel industries in order to avert war. The rest followed. In 1975, Rohatyn’s own opportunity to act as saviour through political entrepreneurship presented itself. He seized it.

New York was broke. Accounting gimmicks could no longer conceal the truth: a swelling municipal work force and budget had overwhelmed a shrinking tax base. The city had accumulated short-term debt of about $6 billion. It was running a budget deficit of $1.5 billion a year.

Faced by this crisis, New York Governor Hugh Carey and state lawmakers created the Municipal Assistance Corp, popularly known as “Big MAC”. They gave it the power to issue bonds on the city’s behalf, backed by sales-tax revenue. Rohatyn became chairman of the board in September 1975. He would remain in that position until 1993, an extraordinary run that saw the city’s gradual recovery and, later, the distribution of surplus revenue to areas, like education, that he considered a priority. Seldom has an unelected private citizen held such public power in a great city for so long.

All Rohatyn’s financial and diplomatic skills were brought to bear in persuading unions to slash the number of workers on the city’s payroll, advance state aid, secure loan extensions and more. When the Federal Government baulked at loan guarantees, the Daily News made clear its view of President Gerald Ford across its front page: “Ford to City: Drop Dead”. In the end, the government yielded. By 1980, New York had balanced its budget. Mario Cuomo, who succeeded Carey as governor, would say of Rohatyn: “It would be difficult to exaggerate it. He literally saved the city from bankruptcy.”

This was an extraordinary act of public service reflecting Rohatyn’s fiercely held patriotic belief that, however much wealth a society creates, it cannot function or survive unless it promotes fairness and broad opportunity. Handouts and budgetary recklessness were not the way to achieve this; nor, however, were policies skewed toward the rich.

Resourceful and relentless, he earned the sobriquet of “Felix the Fixer”

Rohatyn was a centrist Democrat. He believed in compromise and the middle ground – unfashionable positions today. He believed in can-do American entrepreneurship and wealth creation. He also believed that the harshness of capitalism needs to be offset to protect the most vulnerable. He would have been appalled by the ways in which special interests have warped representative democracy. As early as 1982, in a commencement address at Middlebury, he said these prescient words:

“The basic test of a functioning democracy is its ability to create new wealth and see to its fair distribution. When a democratic society does not meet the test of fairness – when, as in the present state, no attempt seems to be made at fairness – freedom is in jeopardy.”

Rohatyn had political ambitions beyond New York. He aspired to become Treasury Secretary when Bill Clinton won the presidency in 1992, but his failure to support Clinton early in the campaign probably cost him that job. (He had favoured Mario Cuomo, before supporting the independent candidacy of Ross Perot). Instead, he went to Paris as American ambassador, in a position he held from 1997 to 2000. For Rohatyn, it was a return journey to a country whose beauty always moved him and whose culture accompanied him through his life, not least in works by Pierre Bonnard and Édouard Vuillard.

Out of the limelight in his later years, Rohatyn wrote a book about America’s desperate need for public investment in infrastructure. Nowhere was the internal American decay he deplored more evident than in this area. The balance between private and public interests had been lost, Rohatyn believed.

Still, the twinkle in his eye never dulled. He delighted in beauty and in life’s opportunities, in part because he knew that he might very easily have been denied them. In his youth he had considered becoming an engineer. Instead, Rohatyn became the engineer of solutions, of finding where diverse interests might intersect, of deploying gentle persuasion and obstinate persistence to secure unlikely outcomes. The common ground was what those eyes were trained upon. Many millions of New Yorkers owe him a debt of gratitude; and Americans could do worse than recall, in these polarised times, Rohatyn’s stubborn belief in fairness and compromise.

The Collection of Ambassador and Mrs. Felix Rohatyn will be auctioned in New York on 14 October.