By Forest Casey
Treasures from the world of pre-war racing, all featuring added provenance from a true enthusiast collector.

R arely does a collector so completely embody the spirit of vintage competition that their ownership enhances the cars themselves. Celebrated for his international racing exploits, the late Peter Giddings brought a genuine passion for pre- and post-war motorsport from his childhood home of Britain to California, where he spent decades racing – and winning – with a sensational collection of the finest Grand Prix and sports racing cars in existence. RM Sotheby’s is proud to offer the final three racing cars from the Peter Giddings Collection at our signature Monterey auction this year, scheduled to run from 12-14 August, 2021 at the Monterey Conference Center. 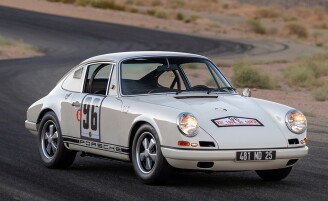 As all true racing connoisseurs know, the roots of European motorsport run strong in France. Louis Delage proved himself to be an equally adept steward of a successful Grand Prix motorsports team as he was a forward-thinking visionary of luxury road cars. Under his leadership, the Delage team claimed total domination in 1927, winning all four European-based Grands Prix with lead driver Robert Benoist at the wheel. This example, Chassis no. 4 of four factory team cars built, went on to a sensational racing career ex-works, with first private owner Louis Chiron taking it to the 1929 Indianapolis 500 and finishing a respectable 7th place. Having received a thorough restoration performed by Auto Restorations of New Zealand to its 1936 specification, as raced by Dick Seaman in voiturette competition, by the time Peter Giddings acquired this supercharged Delage in 2012, he only had the opportunity to compete with this example on a few select occasions on-track. No doubt they were all memorable.

Over the course of his lifetime Peter Giddings would own no less than ten 6C and 8C Alfa Romeos, which he would campaign with great success internationally in vintage competition. As Giddings put it, “There are few cars that can be drifted as controllably as a Monza.” A very small handful of drivers would share the equivalent experience, but having owned three 8C Monza examples over the years, and having contested literally hundreds of races in them, Giddings proved to be not merely one of the world’s experts in theory regarding all things pre-war Alfa Romeo racing, but in practice as well. A regular sight at the Monterey Reunion, this weapons-grade 8C 2300 Monza has been completely restored by Auto Restorations New Zealand and features a very healthy Jim Stokes engine. History at speed.

Finishing our spectacular list with the example that has attracted the most attention from Ferraristi, this pre-war Alfa Romeo speaks to the roots of Scuderia Ferrari. The Giddings’ 8C 35 features a 3.0-litre 8C 35 engine #50012 (SF #64), which had been configured by American performance legends Ed Winfield and Fred Offenhauser for competition at the Indianapolis 500 in 1938. This remarkable engine would go on to compete at Indy no less than seven times. Restored for vintage competition by Auto Restorations of Christchurch, New Zealand, this spirited Alfa Romeo Grand Prix “monster” was still scoring a regular series of first- and second-place finishes at the hands of Giddings well into the 21st century at vintage race events.