BRITISH actor Gary Oldman is celebrating after picking up his first-ever Best Actor Oscar for his portrayal of Winston Churchill in Darkest Hour.

Oldman’s performance as the former British Prime Minister had already seen him walk off with the top male acting accolades from the Golden Globes, Screen Actors Guild and BAFTA.

Churchill remains an enduring fascination for both film and TV productions and this latest acclaimed performance comes just months after John Lithgow also picked up major awards, including an Emmy, for playing the political heavyweight in Netflix’s The Crown.

But would Churchill approve of these depictions if he were still alive?

Back in 1954 the then prime minister was very vocal about his dislike of an official portrait by Graham Sutherland, which was painted to celebrate his 80th birthday.

Churchill complained that the painting made him ‘look half-witted’ and his wife later destroyed the work because of the distress it caused her husband.

The furore surrounding the unveiling is captured in a Ronald Searle cartoon from the upcoming Political Cartoon Collection of Jeffery Archer sale (14 March, London), which features a number of Churchill cartoons.

Churchill’s critique of the portrait is perhaps more informed than most as he was himself a keen painter. 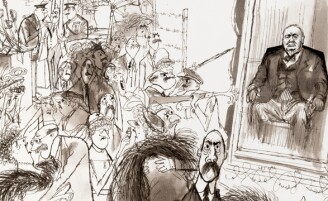