W hen this 2010 McLaren-Mercedes MP4-25, chassis no. 25A-01, takes the track before the Formula 1 Pirelli British Grand Prix at Silverstone in mid-July, it will represent a return of a veritable chariot, used by inarguably the greatest of our generation’s gladiators, once again operating at full speed, as intended. A champion’s car – or more accurately, a World Champion’s car twice-over – piloted to victory not only by Lewis Hamilton, but also by Jenson Button; the first time in FIA Formula One World Championship history that two drivers who already claimed the title of World Champion were competing together from the opening race.

This indelible artifact of motorsport history had its worth forever insured as a result of this unbeatable provenance. Perhaps nobody would have dared to expect the record-shattering success that Hamilton has experienced, not simply in the world of professional driving, but in the realms of fashion and culture writ large. Personalities like Hamilton, who transcend sport itself, come around once in a lifetime. The opportunity to own a substantial piece of the early stages of that extraordinary trajectory is a rare one; this example embodies the ultimate materials and technologies working in tandem with the ultimate driver. From his first encounter with MP4-25A-01, motorsport’s most decorated driver, Lewis Hamilton, left his mark on this GP-winning example, itself representing a series of firsts right down to its return to Hamilton’s home circuit of Silverstone on July 17, 2021 for what will arguably be the most exciting auction of its kind. 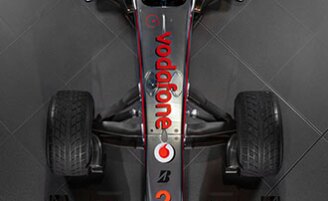 
By the time Lewis Hamilton finally climbed into McLaren MP4-25A chassis No. 1, underneath the paddock of the Kuala Lumpur racetrack before the Petronas Malaysian Grand Prix on 4 April, 2010, the barometric pressure was dropping quickly; the partly cloudy weather forecast the McLaren-Mercedes team had been counting on had abruptly shifted to severe thunderstorms. Any chance of setting a competitive qualifying time was dashed; the race itself was going to be made even more challenging through the team’s strategic tire choice, opting for the hardest, most durable option. It was all down to Hamilton, then, to prove his driving abilities at the wheel of chassis 25A-01.

Hamilton’s achievement on the day has since been described by motorsport critics as the “Masterclass in Malaysia.” Displaying raw driving ability, he advanced from near the back of the pack – 20th place, four cars from dead last – first flying up seven places to 13th, then taking three more places by the fourth lap of 56 total, setting up a fierce battle for 9th place against Vitaly Petrov in the fifth lap. Hamilton passed, then pulled away from Petrov over the subsequent two laps, but also acquired a black-and-white warning flag from the officials in the process. From then on, fortune turned toward Hamilton and the McLaren.

By the later legs of the Malaysian Grand Prix, the team’s choice of tire was paying off, as Hamilton was one of the last to enter pit lane, swapping from hard to soft tires. Rule changes in 2010 demanded drivers only make one fuel stop per race. When the checkered flag fell, Hamilton transformed a 20th place qualifying into a 6th place finish, a display of both his raw abilities, but also a glimpse of the long-term strategy that has set him apart from even the best drivers. Regardless of his competition, throughout the 2010 season, whenever Hamilton took the wheel of chassis 25A-01, magical things seemed to happen.


Designed from the ground-up for lightweight strength and agility, the McLaren MP4-25 was a bespoke chassis construction; made of carbon fiber composite molded into a honeycomb chassis to maximize both space and safety. Still powered by a high-revving, naturally aspirated Mercedes-Benz V-8, the McLaren MP4-25 now featured an advanced aerodynamic system, allowing its driver to use the comparatively still air within the cockpit to disrupt the air flowing over the roll bar, putting the rear wing in a stalled state, enough to earn an extra 6 mph on straightaways. The complex system attracted the attention of rival Formula 1 team Red Bull, which requested an investigation into the “F-duct” before the first race of the 2010 season in Bahrain. The system passed the FIA’s formal inspection, giving Hamilton and teammate Jenson Button an advantage over their competitors.

With the 2010 season shaping up to feature more fierce fighting for first place, the fluid dynamics system on the MP4-25 proved especially critical, as that year also marked the return of Mercedes-Benz as a constructor, and the return of legendary driver Michael Schumacher at the wheel. Along with Mercedes-Benz, three other teams were added to the constructor’s championship that year, including a re-formed Lotus Racing team. One more famous name provided additional gravitas to the season, as 2010 was Bruno Senna’s first year in Formula 1. McLaren’s competition would indeed be fierce throughout the year, even within the team itself.


With McLaren co-drivers Jenson Button and Lewis Hamilton both claiming driver’s championships in the two years proceeding the 2010 season, the MP4-25 was intended to be exceptional even from its onset. With Button and Hamilton on-board, the McLaren team represented the first time that two World Champion F1 drivers were competing together on one Formula 1 team. Both Button and Hamilton drove chassis 25A-01 throughout the season, both leaving positive reviews. In later interviews, Button expressed the notable difference in his career when driving a race car purpose-built for a world champion; the most-skilled drivers in the field often also are driving the most adept machines. And McLaren MP4-25A-01 was built to outrun and outlast its most dedicated rivals.

In Istanbul, at the Turkish Grand Prix, with Hamilton at the wheel, MP4-25A-01 fended off not only the Ferrari F10 race cars of Fernando Alonso and Felipe Massa, but outlasted both Red Bull challengers, and even survived a brief scrap with Button to emerge victorious. This not only represented the first outright win of the season for Hamilton, but also the young driver’s first and only victory at the Turkish Grand Prix. Racking up another podium finish at the final race of the season in Abu Dhabi, and it seemed that MP4-25A-01 was destined for victory; the chassis suffered no crashes or accidents, its only non-points earning outing was during a rained-out race in Korea with Button at the wheel.

With the driving career of Lewis Hamilton now eclipsing Michael Schumacher’s old record of race wins, the MP4-25A-01 can now be properly viewed as a tool that strengthened and solidified Hamilton’s place in motorsport history. This chassis is not only the first of Hamilton’s race cars to be offered for public auction, but even more notably, the first Grand Prix-winning Hamilton race car to be offered for public auction. In chassis MP4-25A-01, Hamilton had his first wheel-to-wheel battle with the great Michael Schumacher; in this chassis, one can witness the evolution of Hamilton’s career into the calculating strategist beloved by Formula 1 fans today.

Serious motorsport collectors want to feel a piece of history, to know that their memorabilia or automobilia purchase was once in the company of greatness. But this is no mere piece of signed memorabilia; not simply a show car, this was the very chassis that put Hamilton on top of the podium after the Turkish Grand Prix. And, thanks to support from the Heritage divisions of the original factory teams, MP4-25A-01 is still in ready-to-race condition.

In perhaps the most thrilling “first” for fans of both motorsport and vintage racing, the still-potent performance of the McLaren MP4-25A-01 will be shown on-track before the running of the Formula 1 Pirelli British Grand Prix 2021 at Silverstone. Not simply part of a static viewing, this example will be operating as intended – at high speed, with a professional driver at the wheel. Certainly, a groundbreaking event in the auction world, and a dramatic way of displaying the abilities of chassis 25A-01.

With Lewis Hamilton now rightly considered not simply an icon in the world of racing, but as one of the greatest athletes in the history of sport, this example becomes more than a mere motorcar. A massive technological achievement, with its innovative aerodynamics and futuristic materials, the McLaren MP4-25A-01 is a product of British ingenuity paired with a German powertrain. Proof of its on-track prowess before the British Grand Prix will be an emotional homecoming for many Formula 1 fans. While client confidentiality precludes knowing exactly how many cars exist in private ownership, it is believed to be only a scarce few. As such these examples remain highly coveted and largely in private hands, unlikely to be sold in the near future. No subsequent car can replicate the significance of this first chassis, MP4-25A-01. For the ultimate motorsport enthusiast, the sale of this first Lewis Hamilton GP-winning McLaren represents a piece of automotive memorabilia that would be impossible to replicate; a truly unrepeatable opportunity.