Two photographs – Isolation and Edges Fold Fold – by Erica Baum are being offered in a special collection celebrating 50 years of photographs at Sotheby's.


D ogeared book pages, vintage sewing patterns, chalkboards and card catalogues: Erica Baum’s mesmerizing photographs take these now-antiquated ephemera as their focus. Tightly cropped photographs, her style of art making since the mid-1990s, are often likened to found-poetry, and for good reason. Like a poet with words, Baum folds and maneuvers her source materials at origami-like angles, creating unexpected junctures of language and image. She photographs these framings, and in doing so, forms something suddenly and strangely new.

Baum (b.1961) first began taking pictures of smudged and half-erased writings on classroom chalkboards while earning her M.F.A. at Yale. That breakthrough project has since spindled out into a number of series that abstract concrete objects and language into vignetted visions.

Though embracing elements of chance, her images are the result of intensive investigation. She hunts out materials from disparate places – estate sales, thrift stores, the streets of New York City – then sets to work with an almost archeological rigor, exploring just what they may have to say to us today.

By taking these mediums of knowledge transference into her studio, she experimentally switches their lines of communication until something reconnects. These are longstanding fascinations for Baum; though the New York-born and based artist started making art as a teenager, she first earned her Bachelor’s degree in anthropology from Barnard, followed by another in linguistics from Hunter College, before ultimately pursuing photography at Yale .

Two works from Baum, Isolation (2017) and Edges Fold Fold (2018) (both available for immediate purchase with Sotheby’s), offer revealing counterpoints in her recent practice. In Isolation, we see a black-and-white image of the iconic French actress Brigitte Bardot, clad in a tie and collared shirt. She casts a sultry glance to the side. Here, the yellowing edges of the paperback book, probably a pulpy book version of a movie, appear like collaged and curtained ends to a glimpsed stage. The photograph comes from an ongoing series called The Naked Eye. In these images, Baum opens a book, stands over it, and photographs at random. Caught at different angles, the resulting images are flattened and serendipitous.

“I open the book and take a very straight deadpan photograph,” explained Baum of her process, “The angle and the selection and material within it creates an object. It remains a really fun project because I don't know what I'll find and it's always full of surprises.”

Such images act almost as a cinematic still life, arresting one moment from a greater narrative and offering it up as a window into that story. The gesture calls to mind Cindy Sherman’s “Film Stills” and the ethos of the Pictures Generation, with which Baum is often aligned. At once, there is an improvisational quality to the works, a quiet spectacle of spontaneity, that sets pieces like Isolation apart. The droll wit of its seemingly dramatic title adds to this winking effect – Bardot is quite literally isolated from the rest of the book.

“The artist is, in a sense, playing with registers of fiction and fact...” wrote Caroline Busta in an Artforum review discussing the series. “By using books ‘incorrectly’ – physically folding their pages, interrupting their normal function to collapse their original narrative – she forges other paths through them, generating alternative relationships to the words and graphics they contain.”

Where there is diligence to Baum’s works, there is also irreverence, immediacy and a sense of play. In these images, Henri Cartier Bresson’s exaltation of a photographer’s “decisive moment” can be imagined in a whole new way – a moment not of the photographer’s choosing, but fate’s.

Baum’s images are at once surprisingly richly textured and tactile to behold with grains of paper pulp, marks of human wear-and-tear, and aging paper visible. Such formal qualities in Edges Fold Fold (2018) from Baum’s recent series, Patterns (2018) are based on patterns in a series of vintage sewing booklets. In these images, Baum focuses on small sections of the patterns, layering their semi-transparent papers to create complex, manifold images.

Baum came across the sewing patterns while exploring thrift stores in Edinburgh, Scotland, but didn’t work with them right away. “I put them aside thinking maybe there would be something in there,” said Baum. “In fact, they sat around in my studio for a couple of years before I decided to open them up. Then they became a really deep well to draw from in my work. Which goes to say, I can't always anticipate what I'll find.”

Where there is diligence to Baum’s works, there is also irreverence, immediacy and a sense of play.

Formally, Edges Fold Fold juxtaposes a bit of a sewing pattern's numbered shapes – each the outline of a garment segment – with a part of a blue-dotted pattern used as a sewing guide. The words "Fold, Edges, Fold" appear in bold capital letters – these are directions for sewing, but here appear as another comedic invocation of Baum’s process itself.

The subtle humor of the work embraces elements of Pop art – Andy Warhol’s advertising-inspired early works along its celebration of everyday objects as well as Sol Lewitt’s direction-based participatory projects. Baum’s passion for poetry has often been noted, and in such idiosyncratic juxtapositions she recalls poets she admires: from Gertrude Stein’s Dadaist imaginings to the short, powerful poems of Emily Dickenson (Baum’s recent exhibition, A Long Dress at New York’s Bureau was titled after one of Stein’s poems in the collection Tender Buttons).

Such images possess an indirect political dynamic – between the appearance of things, their intended meaning, and their interpretation. Though often working with a temporal distance from her materials, Baum noted that in the past year she’d felt more actively engaged with protests than she had before in her life. She had collapsed, in some sense, the distance between her work and the world outside by documenting the boarding up of New York buildings and the language of protest signs. “I don’t usually do work that responds to the moment,” she said, but our time too, she noted, was folding in on itself, not unlike a piece of paper – perhaps it would, too, have something unexpected and welcomed to say. 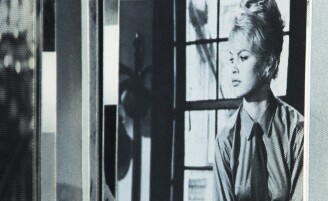 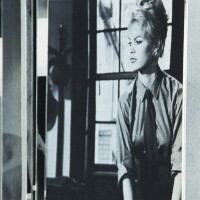 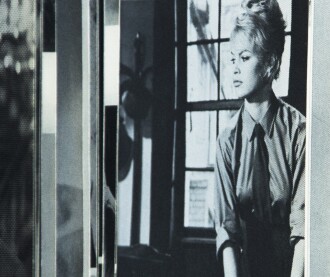 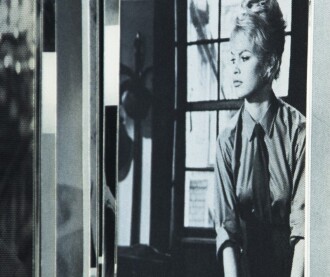 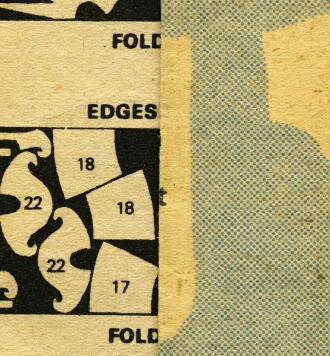 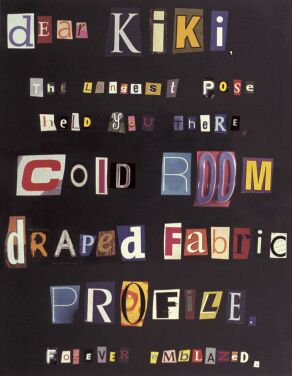 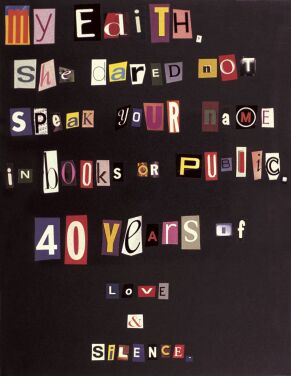 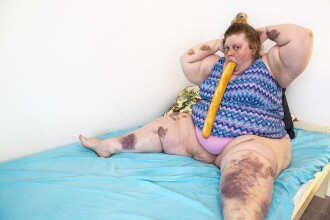 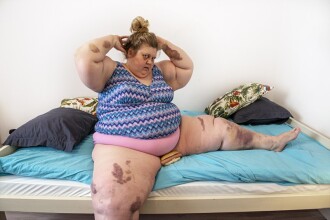