By Forest Casey
RM Sotheby’s looks forward to 2022, with a one-of-a-kind figurehead of the classic car scene. 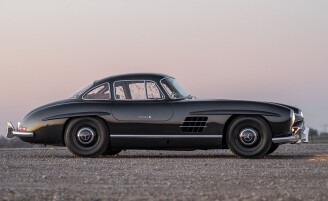 Switching back to Standard Time implies the yearly harvest is complete, and the preparations that we have been making for wintertime now attain a new level of importance. Shadows grow and sunshine earns a new level of importance. Every glimmer of light becomes a precious opportunity to steal just a few more glances from envious pedestrians. A treasured chance to turn one more lap before nature goes to sleep and dreams of warmer times.

And yet, those who have experienced this cycle a few times appreciate that wintertime possesses just as much possibility for growth and renewal as any other season. Just on the horizon is a new year, with the chance for new adventures and opportunities, as well as the educated admission that, as much as we have all experienced, we have not seen it all. For fans of mid-century European sports cars, this point is even more true.

Already an early highlight for RM Sotheby’s first auction of the new year, held at the Arizona Biltmore Hotel in Phoenix on 27 January 2022, this Mercedes-Benz 300 SL Gullwing is proof that unique treasures still exist, even amidst a thriving classic car scene, full of old favorites and enduring figureheads. Freshly photographed by RM Sotheby’s expert in-house photographer Darin Schnabel, this gorgeous Gullwing has seemingly saved the last bit of daylight, all by itself.

Among those usual suspects, the Gullwing has become a cornerstone of fine collections, whether their focus is mainly on Mercedes-Benz, German cars in general, or specific to supercars from every era. Made with advanced motorsport technology at its core and topped with perhaps the most iconic doors ever offered on a production vehicle, the Gullwing has long earned its place as an enduring classic.

This specific example can be considered as genuinely uncommon among Gullwing coupes. The exterior paint color, subtle in any light, was specially ordered in a shade of dark gray called Dunkelgrau, (code no. DB164). Only two Gullwings left the factory in this rare and supremely tasteful color.

Moving into the cabin, this specimen reveals itself to be truly unique. If two Gullwings left the Sindelfingen, Germany factory with the same exterior color, only this example, no. 5500243, left with an interior upholstered in beige with red-and-green plaid fabric seats.

While full leather interiors were an option for period customers, as the Gullwing was typically purchased by enthusiast sports car owners, many preferred the fabric seats. A peek inside the period-built 1955 Mercedes-Benz 300 SLR famously piloted by Sir Stirling Moss reveals that the original race car also featured an interior clad in plaid. Recently refinished by marque expert Rudi Konizcek, who advised upholsterers Quality Auto Upholstery and Hjeltness Restoration of Escondido, California, on bringing this example’s stunning interior back to its original luster, the finishing touch was the all-important set of color-matched luggage to match the beige interior.

Underneath this example’s front-hinged hood lives a legendary powerplant: An inline-six-cylinder engine canted over nearly 40 degrees to allow for the impossibly low silhouette of the Gullwing. This engine was thoroughly serviced under the supervision of Mercedes-Benz expert Rene Luteraan at Van Nuys Sports Cars, which assembled the engine, clutch, and transmission, installed new axle boots, and handled much of the final assembly and fitting. The finished product, clad in its one-of-one color combination, is without exaggeration something to keep devoted classic car fans enthused throughout the winter months, and is sure to be a star when it crosses the stage at RM Sotheby’s Arizona 2022 auction.Good things, after all, can require a wait.