By Mariko Finch
David Yarrow has a photographic career spanning more than thirty years. From his origins in sports photography, in recent years he has travelled the globe documenting the most remarkable aspects of human nature and the animal kingdom with his distinctive eye. Famous for his 'close-up' approach, Yarrow has explored some of the most dangerous, breathtaking and remote environments on earth. As his Over the Sea to Skye is offered in the Scottish Art sale on 18 September, we caught up with him to discuss nature, North Korea and donating £2 million to charity.

Mariko Finch: How did you first get into photography?

David Yarrow: I started when I was about 15 or 16, I started photographing one or two little small amateur horse events in Scotland, and what I'd do is I'd take pictures of all the competitors, get their addresses, and send out proofs of the prints to them all. Then I would develop them in my own dark room. I’d just be photographing any sport and trying to find ways of monetising it by selling it to the competitors. I then started doing a bit more professional sport, and in 1986 I got invited to photograph the World Cup Finals in Mexico.

I ended up working for the Times there, which was a great thrill. I wasn't very good, but I managed to get a very big picture of Maradona in the final, which saved my bacon. Throughout this I was studying economics at university, where there was a bit of parental pressure, so I ended up getting a job in banking rather than going to work for Allsport, but I always kept it going, in a non-professional capacity. Landscapes, people, wildlife – anything I found to be of interest. It's been an integral part of my life for 35 years.

You have spent your career in far-flung locations around the world in pursuit of striking images. How does working in the Scottish Highlands differ and are your locations as important as the subject matter?

Well I’m Scottish, so if I am photographing in Uganda and I do a good job and then I come back home and I do a bad job, it reflects badly on me. There’s an added pressure to do a good job in Scotland. In my country, you have to have a layer of narrative. I’m emphatically making it about the context, it’s a Scottish stag and that has to be clear from every element in the picture.

MF: What were the logistics of getting close enough to the stag to make this image?

It was a long time in the planning. You have to find the right man to take you out in to the wild, and wait for the right conditions. We had to work out how to get to the top of the hill before the sun came up and hide so that the stag couldn’t see us, but also work in a pincer movement to end up in the correct position to get the shot. It was taken at about twenty to six in the morning because I wanted the sun to be low, and looking out over the Isle of Skye turned it in to an exceptional moment. I wanted a picture that was quintessential Scotland, and this is it.

MF: You're very well-known for your images of animals in their natural habitat, and also your conservation and charity work. However, you've spoken about your frustration at being described as merely a wildlife photographer. Is that term is too limiting?

DY: It's a combination of several things: firstly, much of my work is about humanity. That's what fascinates me. I'm about to head to North Korea to start a project there, again, photographing people. I remember once speaking to Dennis Stephenson when he was on the board of Tate, he said to me of all the forms of art in the world, the one that least engaged him was wildlife photography. When I asked him why, he said: "it can be a little bit too literal". But I think my approach to wildlife photography is to see it very much as art rather than recording a moment.

MF: You have a very distinctive style that is reminiscent of classical modernist photography, with images ranging from the purest white to the deepest black – and a strong emphasis on composition. Are there particular photographers throughout history that have resonate with you?

DY: There are many photographers that have inspired me, and cinematographers as well. I've – always been a big fan of Ridley Scott, and Emmanuel 'Chivo' Lubezki who shot The Revenant. One reason I made a bit of a name for myself is getting very close to the animals and making sure I'm working with wide angle lenses rather than telephoto lenses.

Robert Capa told us: "if your picture is not good enough, you're not close enough". That's obviously a line that resonates greatly with me. I think in terms of composition it's so important. I've just got back from Africa actually and I think it's now something that becomes reasonably naturally to me, but I try and get as close as possible.

MF: Why do you always work in black and white?

DY: There are three reasons: Firstly, it's timeless. Secondly, it's art rather than reality. We live our lives in colour and sometimes I think it clashes with the colours in real life.  I just feel this is aesthetically stronger. Sometimes I find that working in Africa, the expanses of brown don’t come across as well in a colour photograph. The black and white is more arresting. Thirdly, a photograph's like a piano. You should be able to use all 88 keys on the piano and go from the rich blacks to the full whites.

MF: You've seen some incredible scenes during the course of your career. Has there ever been anything you've found difficult to photograph, whether thematically or logistically?

DY: I don't photograph war. I don’t want to enter into that debate as to whether a photographer should put his camera down and help a wounded person, or whether he should continue to do his job. I work with animals that sometimes have been injured through poaching, and there have been experiences where I have seen rhinos hacked to within an inch of their lives. But I think it's really important to document that as well, to raise awareness. I have been to some tough places, but I get an additional thrill from going to a place I know no other photographer has been. We live in a time of content overload, but to be able to offer new perspectives on a place is exciting. Journey Through the Highlands & Beyond With Highlights from Scottish Art

MF: What projects are working on at the moment?

DY: I'm in Monaco for our book launch and an exhibition of my work. Prince Albert and his wife are keen conservationists and very supportive of the work we do. I am very honoured that they are hosting me tonight. From here we go to Oslo in two weeks’ time and then London in four weeks’ time. We’re very proud of the book. Tom Brady has written the foreword and I want it to be one of the best selling books in the world between now and the end of the year. It’s very important to our brand that we give back to conservation. This year, we will have donated £2 million from the sale of prints. 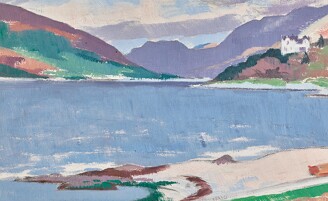