T he David H. Arrington Collection of Ansel Adams Masterworks grew out of a lifelong passion for photography. David’s early interest in photography began behind the camera, taking pictures as a teenager. He recently recounted, ‘I remember the first time I saw an image slowly appear in the developing tray in my darkroom. I was 15 years old, mesmerized and thrilled beyond imagination at the possibilities inherent in photography. Now at 60 years old, I still feel the same.’

A proud native Texan, David was born and raised in the Dallas community of Oak Cliff. After graduating from Texas Tech University in 1983, he moved to Midland to pursue a career in the Permian Basin’s oil and gas industry. As President of Arrington Oil & Gas Operating LLC, David has always shared his passion for Ansel Adams with his colleagues and the local community. Stopping by the company headquarters is like visiting a museum dedicated to Adams. Until recently, the mammoth mural-sized print of Gravel Bars, American River, California (see Lot 33) hung in the company’s lobby. Several mural-sized prints, including Yosemite Valley from Inspiration Point, Winter, Yosemite National Park (see Lot 48), Clearing Winter Storm, Yosemite National Park, California (see Lot 9), and The Grand Tetons and the Snake River, Grand Teton National Park Wyoming (see Lot 54) adorned the entrance and hallways. Employees were encouraged to select Adams photographs to hang in their offices.

Over the years, David met a few very important individuals who had a transformative effect on his collecting. In Andrew Smith and his eponymous gallery David found a partner in hunting for the best and rarest works by Adams. Andrea Stillman, who worked closely with Adams in the 1970s and has authored numerous books on the photographer, was a source for Adams scholarship. Perhaps his most pivotal relationship has been with Michael and Jeanne Adams, the photographer’s son and daughter-in-law, with whom David met at their Carmel, CA, home in 2006 and 2007. David had the incredible opportunity to acquire a small treasure trove of rare prints by Adams – many of which are undoubtedly unique – directly from the photographer’s family. Passed down from Adams to his wife Virginia, and subsequently to his son and daughter-in-law, these photographs offer a visceral, direct connection to Adams. Many of these photographs, including those offered here, were selected by the eminent curator by John Szarkowski for inclusion in the international multi-venue retrospective Ansel Adams at 100 (2001-02).

To David, the stories behind his photographs have been of equal importance as the objects themselves. Standing in front of any print– from the definitively early, rare print of Moonrise, Hernandez, New Mexico (see Lot 29) to a quieter, early image like Helmet Rock, Near Lands End (see Lot 80) – David will energetically recount for you both the technical and anecdotal information behind its creation. Over the years David has generously loaned photographs from his collection to exhibitions both domestic and abroad, including Georgia O’Keeffe and Ansel Adams: Natural Affinities (Santa Fe 2008); Ansel Adams La Natura è il mio Regno (Modena 2011-12); Ansel Adams: At the Water’s Edge (Salem 2012); and Ansel Adams: American Master, Selection from the David H. Arrington Collection (Lubbock 2015-16).

The first photograph David purchased was Adams’ Monolith, The Face of Half Dome (see Lot 37). More than twenty years since he made that acquisition and with a collection now numbering in excess of 650 photographs, it still comes as a surprise to David when he is referred to as a “collector.” To him, it has simply been his great fortune to be surrounded by the photographs he loves. ‘I have thoroughly enjoyed my collection of Ansel’s photographs on a daily basis as they adorn every room and hallway in our Midland, Texas, offices. Building this collection over several decades has brought me great joy, from the initial hunt to learning about each photograph to living with them. It’s time, however, for the next lucky person to share in some of this joy.’ It is Sotheby’s great honor to partner with David Arrington as we bring this unparalleled collection of Ansel Adams photographs to the global collecting community. 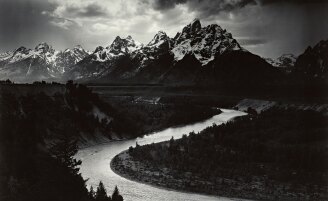