Changing the Direction of Contemporary Art with Jon Thompson

By Sotheby's
Artist and Goldsmiths Professor Jon Thompson taught many of the young artists who would later find fame as the YBAs, or Young British Artists. His innovations in art teaching, particularly in allowing students to work across many mediums, are often cited as a catalyst for the YBA's work. Read on to discover more about this important artist and the exhibition of his work on show at S|2 London.

J on Thompson was born in 1936 in a small village in Derbyshire, England. He grew up under the tutelage of his grandfather, a former ecclesiastical woodcarver who taught Thompson drawing and carving. Scholastically gifted and armed with the tools of drawing and sculpture, Thompson arrived at St. Martin’s School of Art in 1953 as a sculpture student.

However, influenced by the transformations in post-war art education, Thompson turned to painting. He was inspired by the blurring of genres he saw in Modern painting, particularly the surreal abstractions of Christopher Wood.

When I went to art school I thought that was what art was about, that is skill, craftsmanship and veracity in terms of the appearance of things, but at art school there was a brutal moment of awakening to discover all the contemporary artists of the period were not doing the things I thought art was about at all.

After studying at the Royal Academy Schools in London, Thompson was soon awarded the 1957 Prix de Rome, the premier award for painting in Europe, which offered the winner a Grand Tour-style grant to study and practice in Rome.

In the late 1950s Thompson began working at the Lancaster College of Art, the start of a teaching career which would span more than forty-five years. He embraced the British Pop movement and was picked up by the Rowan Gallery, where he had his first solo exhibition in 1960. Over the next three years he was featured in five more solo exhibitions and three more Pop group exhibitions.

He then turned to full-time teaching, during which he became Head of the Fine Art department at Goldsmiths College, where he remained for 21 years. This period witnessed a number of fundamental changes to higher art education, to which Thompson’s contribution was critical. He allowed formerly strict barriers between art specialisms to break down, encouraging young artists to experiment with multiple mediums and genres.

After a long hiatus Thompson returned to art in the 1980s in the form of large-scale conceptual photography. These photographs often feature the artist himself in stark, cropped surroundings with seemingly mundane objects, yet they occupy a realm between realism and abstraction. These photographs slide between fuzzy domesticity and a cold clarity which evokes the cruel precision of Robert Mapplethorpe, in whose work human mortality is constantly reflected back at the viewer.

A desire to expose the unknowable peppers Thompson’s remarkable curatorial work, too. He oversaw Falls the Shadow (1986) at The Hayward Gallery, London; Gravity and Grace (1993) at The Hayward Gallery; and Inner Worlds Outside (2006) at the Whitechapel Gallery, London, among others. These exhibitions explored the mind of the artist, seeking to upset categories and disrupt the viewer’s understanding of the makings of art.

Thompson took up painting again in 2004, remarking that ‘straight away it took over my life.’ His late paintings show a deep interest in the technical side of painting and its ability to produce an aesthetic experience in the viewer, which he called ‘the metaphysical aspects of painting.’ Outwardly simple and formalistic, Thompson’s paintings are saturated with clues to Old Masters, particularly to fifteenth-century artists such as Carlo Crivelli and Jan van Eyck. Origins are of particular interest in these paintings. Thompson toys with the elemental colours and composition of a masterpiece in these paintings, and once said that what interested him was the moment of creation itself, the split-second where ‘everything is brought to the point of focus where it could fall apart in an instant.’

Thompson’s work has recently been featured in a retrospective at the Annet Gelink Gallery, Amsterdam; 2015 Summer Exhibition at the Royal Academy, London; Art & Music at York Art Gallery, York; and What If It’s All True? What then? at Mummery + Schnelle, London. 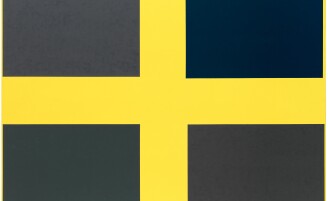