Ahead of the upcoming Collections sale in London on 3 May, we look back at three exceptional lots made using ebony, and the history of the material that has captivated collectors around the world for centuries.

Finely carved work in ebony fed a European domestic and colonial market hungry for this rich, lustrous and exotic material. It was also imported in a raw state too and a favoured material employed in Dutch Kunstkabinetten from the beginning of the 17th century and perhaps more recognisably in the ripple moulded frames seen on Dutch pictures from that epoch. There was seemingly a unifying delight in experimenting with this material to produce surface effects and texture by both European and Asian craftsman.

Ebony, initially sourced in Mauritius, was sourced from across the Dutch colonies including Batavia, modern day Sri Lanka, the Coromandel coast of India and the Moluccas in Indonesia. The movement of furniture is well documented between these colonies as well as to Europe. 17th and 18th century inventories in Europe as well as in Batavia record objects from India, Indonesia, Sri Lanka, China and Japan filling the cosmopolitan interiors of the wealthy. Ebony was recognised, like ivory and turtleshell, as being particularly desirable. In 1677 Thomas Bowery an Englishman travelling through India writes of tables and chairs in ‘that admirable wood ebony’.

Objects in ebony were instantly recognisable as items of value in both the East and the West and in Europe we see some individual objects achieve almost mythological status. In England their origins were sometimes thought to be Tudor. Romantic provenances develop, they became the gifts of Kings, from the sea-going vessels of great explorers, from the bed chambers of rulers and the trappings of hallowed ecclesiastical halls. The antiquarian Henry Shaw’s exquisite hand-coloured engravings capture two ebony chairs in his rich compilation, Specimens of Ancient Furniture – Drawn from Existing Authorities, published in London in 1836.

Shaw’s reproductions are boldly captioned ‘Ebony Chair Given by Charles II To Elias Ashmole’ (still in the Ashmolean Museum today) and ‘Ebony Chair Belonging to Horace Walpole at Strawberry Hill’. Walpole's love of this work and the decoration of his gothic revival mansion enforced this belief that these were English and early. He acquired a set for Strawberry Hill in 1763 from the Conyers family of Stoughton House, Huntingdonshire. These feature in a watercolour from 1788 by John Carter of the ‘Holbein Chamber’ at the great house.

These exquisitely worked pieces were a real contrast to furniture produced in Europe, particularly in Britain in the 17th and 18th centuries and have always been fashionable – for over three centuries. Certainly the Ashmole ebony chair, which features shallow relief carving, was considered important enough to be part of his gift to the University of Oxford in 1682, and an extensive suite of seat furniture, acquired by Thomas, 1st Viscount Weymouth is recorded at Longleat on the 15th September 1740.

Lot 128 is testament to the great European tradition of collecting ebony furniture and was formerly in the collection of the Dukes of Hamilton in Hamilton Palace. This great treasure house in Lanarkshire, Scotland, held one of Europe’s most important art collections. The 10th Duke was a passionate collector of art and many of the items he acquired for Hamilton Palace are now in museums and galleries around the world. Amongst a kaleidoscope of objects, the Duke acquired an extensive  group of ebony furniture which included a fabled suite of ebony bedroom furniture, incorporating 17th century elements from the Coromandel Coast and were supplied by John Webb of Bond Street in 1826 and 1828. 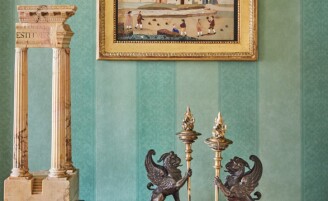