B uilt in 1260 for the Knights Templar, Bisham Abbey in Buckinghamshire is now home to the National Sports Centre, and Team GB's training facility for their recent Rio campaign. But in the 1920s, it was home to Mary Borden and her family. It was here, after a career as a nurse on the front line of the First World War, that she spent the next few years of her life writing – both poetry and personal accounts of her time tending to the wounded of the battlefields of Northern Europe. Celebrated Irish artist Sir John Lavery visited her at Bisham Abbey in 1925, and captured an intimate moment of Borden working at her desk.

Bisham Abbey in Berkshire has been in the limelight following the success of Team GB at the Rio Olympic Games. Today, it is one of Sport England’s National Sport Centres and is a training venue for over 20 different sports and organisations, including England Hockey. Few who watched the recent women’s final will forget the dramatic penalty shoot-out against the Netherlands which produced one of the most stunning gold-medal triumphs for Team GB.

However, turn the clock back nearly 100 years and a painting by Sir John Lavery, Mary Borden and her Family at Bisham Abbey (1925), which is a highlight of our Irish Art auction in London on 13 September, paints a rather different picture of life at Bisham Abbey. Seated in a splendid drawing room at the Abbey, Mary Borden smokes a long cigarette and contemplates a manuscript in her lap. The desk in front of her is strewn with papers and pens. In the background, her children converse quietly on a sofa in the corner.

Borden was an American from a wealthy Chicago family who came to London in 1913 and took up the cause of women’s suffrage. At the outbreak of the First World War, Borden established a field hospital under the auspices of the French Army, in which she nursed the wounded from Ypres and the Somme. She recalled her harrowing experiences there in a book entitled, The Forbidden Zone, A Nurse’s Impressions of the First World War. It was published four years after the present work by Lavery, and it is perhaps these manuscripts and memories we see her contemplating. The book shocked reviewers upon publication and brought her to national attention. Whilst working in France, she met Brigadier General Sir Edward Spears whom she married in 1918, making Bisham Abbey their marital home at the end of the war.

MARY BORDEN AT WORK IN A FIELD HOSPITAL IN FRANCE DURING WWI.

The painting belongs to Lavery's highly successful series of 'portrait interiors' he exhibited at the Leicester Galleries, London in 1925 which, as one critic wrote, were 'records of our times and significant commentaries upon that reckless changing thing called 'good taste'' (Desmond MacCarthy, Sir John Lavery’s Portrait Interiors, Apollo, Vol 2, 1925, p. 267). For The Observer, (4 October, 1925) the artist 'triumphs' in the 'shafts of light streaming through tall windows, gilding an object here, intensifying its local colour there…' In the background of this work, Lavery includes himself at his easel reflected in the large mirror. It is a highly evocative and technically superb painting by one of the leading artists of his generation, capturing a moment in time far removed from today.

BISHAM ABBEY AS IT APPEARS TODAY.

The painting, however, represents just one further incarnation of the Abbey’s long history, which stretches back 800 years to its construction in 1260 for the Knights Templar. It was appropriated by Henry VIII during the Dissolution of the Monasteries, was a residence for Queen Elizabeth I and subsequently passed to the Hoby family until the 18th century.

Neither Borden or her predecessors would have imagined that one day the Abbey would become a venue producing elite athletes triumphing at Olympic Games in Rio de Janeiro. 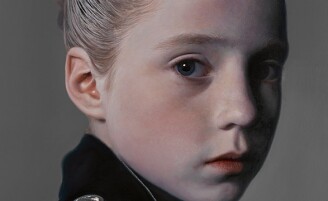