"Beguiling, Immersive and Explosively Coloured", Albert Oehlen at the Serpentine

A major exhibition spanning the career of one of the most important contemporary artist working today includes a cross-section of work from the different periods of artistic exploration in the life and times of Albert Oehlen. In recent years, the strength of the market for works by the German artist have rapidly grown, as both established collectors and new arrivals on the scene have competed to acquire works that play a significant part in the legacy of European painting. The current Contemporary Art Online sale presents such an opportunity, with Untitled (Im Land der Motive brennt kein Licht mehr) (The Lights are out in the Lands of Motifs and The Cow offered for sale, and both estimated at £8,000-12,000.

Having painted abstractly since the start of the 1990s, Geigenbau (Lutherie), which sold for £1.8 million in the Contemporary Art Evening Auction on 3 October, epitomises what Oehlen playfully dubs “post-non-representational painting”, using an abstract idiom and aesthetic but never fully abandoning figuration. Seemingly abstract shapes are set against a white background, encouraging the viewer to attempt to decipher and decode them as objects and figures.

This was an entirely novel approach for an artist who never fears such radical changes: “I had never composed a painting; that was something I didn’t want to bother with. You grease the whole canvas evenly anyway. But now I’m starting to ask myself: why shouldn’t I also profit from the beneficial effect that a white background can have on the viewer”.

Of course, in many instances there truly is nothing to decode and the shapes are simply abstract. Any recognition is reliant on the viewer spending sufficient time with the piece to truly see it, and even then, such is the nature of Oehlen’s practice that they can never be certain whether they are right or wrong in their deductions. An emergent head of hair towards the lower centre becomes a woman in profile, her right hand raised to the sky.

As curator Bonnie Clearwater explains, “Not only does Oehlen introduce fragments of representational images in inconsistent scales, but he also varies the size of the abstract units in a painting: the relative size of each shape moves the viewer’s attention towards, away from, and across the picture plane in rapid succession. The figurative elements exist without dominating the canvas.

At first glance, many of Oehlen's paintings appear purely abstract. Only after the viewer has spent some time with these works do the figurative elements reveal themselves” (Bonnie Clearwater, 'I Know Whom you Showed Last Summer').

This is an essential tenet of Oehlen’s work. Unlike many artists of his generation Oehlen’s practice is not rooted in theory but rather in its capacity to interact with his audience. Like his perennial co-conspirator Martin Kippenberger, Oehlen demands a reaction, but unlike Kippenberger, who allows his audience to stop and delight in the ribald, ironic, pathos-ridden universe that he inhabits, Oehlen demands that they go one step further. The works are not simply aesthetic. He explains, "I want to make beautiful paintings. But I don’t make beautiful paintings by putting beautiful paint on a canvas with a beautiful motif. It just doesn’t work.

I expect my paintings to be strong and surprising. When I see a painting that knocks me off my feet, I say "How could he do that? How did he dare?" That’s beauty" (Albert Oehlen cited in: Alastair Sooke, "I want my paintings to like me", The Telegraph, 1 July 2006, online). Like the works of the great American Colour Field painters such as Mark Rothko and Barnett Newman, the experience of space, scale and colour are pivotal to the work. However, Oehlen’s challenge to the viewer is not solely to experience the immersive and expansive canvas, but to recognise forms within it.

"I am convinced that I cannot achieve beauty via a direct route: that can only be the result of deliberation…"

In his words, “I am convinced that I cannot achieve beauty via a direct route: that can only be the result of deliberation… That’s the interesting thing about art: that somehow, you use your material to make something that results in something beautiful, via a path that no one has yet trodden. That means working with something where your predecessors would have said, "You can’t do that". First you take a step toward ugliness and then, somehow or other, you wind up where it’s beautiful” (Albert Oehlen cited in: Exh. Cat., Bonn, Kunstmuseum Bonn, Albert Oehlen, 2012, p. 71).

Albert Oehlen at London's Serpentine Gallery will be on show from 2 Oct 2019 to 2 Feb 2020, and will include four new canvases specially made for the exhibition, as well as an installation that marks the beginning of Oehlen’s interpretation of the Rothko Chapel in Houston, Texas.

Sotheby's is a proud sponsor of this exhibition. 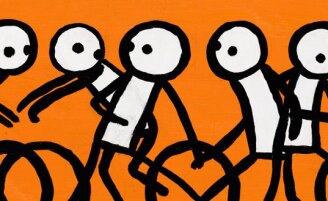