W hether he’s submerged in a Plexiglas box 40 feet underwater, or hanging onto the hood of a car on Havana’s busiest road, visual artist and photographer Michael Dweck has always found a new angle from which to document life. In 2003, he became the first living photographer to have a solo show at Sotheby’s, which helped launch his career. This autumn Dweck will return to our galleries for a new selling exhibition titled, Michael Dweck: 15 Years (29 September–3 October). He will also have two standout works on offer in Sotheby’s Contemporary Photographs auction (3 October). “As an artist, it feels like I’m coming home,” said Dweck, who is based in New York City. “My work is about worlds that are on the edge of extinction. My aim is to transport viewers and help them find a common purpose with the hope of preserving these places, the culture and the people that depend on it.” Ahead, Dweck speaks to Sotheby’s about each of his four major series, as well as his first film, The Last Race, an official selection at the 2018 Sundance Film Festival.

I started to use a camera on the beaches when I was seven years old, and I’ve been going to Montauk regularly since 1975. Right around the late 1990s/early 2000s I started to see things change. The neighbors and fishermen were being priced out, and I was concerned that the village could turn into some theme park parody of itself. I decided to capture the way the Montauk I loved made me feel.

The photos were published in book form so they could be seen in context. It flows like a film of a day in the life of the surfer. Unlike film, the characters aren’t consistent, but the pictures work in sequence, day to night.

I decided to study Impressionism, and I wanted to experiment with refraction, combining a lens, water and light. One day when I was snorkeling around Weeki Wachee near Crystal River, Florida, I saw these women jogging underwater, and I thought, ‘That’s strange.’ I later learned they were from Aripeka Island, just outside Weeki Wachee. They’re like water babies who can hold their breath for ten minutes. Their parents are stone crab fishermen, and they never leave the island. The body of work celebrates the physical charm of the female form. It’s a meditative isolation in an underwater world.

Can you explain your process of making surfboards, some of which feature images from Mermaids?
It took me six months to figure this out. We work with a studio in Costa Mesa who has been making surfboards by hand for 40 years. The "Mermaid" was photographed underwater in the Weeki Wachee River at 2am. I was submerged in a Plexiglas box and photographed her at about 40 feet deep. There was a giant movie light attached to a crane 80 feet above the river. We had the photographs printed with archival pigments on silk, which was then applied to the hand-sculpted polyester foam and coated with fiberglass and seven layers of high-gloss resin.

It is an exploration of a secret privileged creative class within Cuba's classless society. A socially connected world of filmmakers, artists, dancers, musicians and writers in Cuba that was never reported in Western media and never acknowledged openly within Cuba itself. This handful of people had access and freedoms most Cubans didn't. Their talent was their currency. They could travel freely, had access to goods and services from other countries and could make money by selling their art, music, films, books, etc.

How did you break into that subculture?
I went to Cuba nine times in 2008 and 2009. I kind of snuck in and ended up at a party in what seemed like an abandoned 1920s oceanfront mansion. Someone approached me, asking me who I was and what I did, then he walked away and came back. He said that he knew and loved my work, and he welcomed me into their world.

"Even though it was underground, I think Fidel Castro understood the value of a vibrant creative class."

You also got to know the other side, the Castros. How was this not an issue for them?
It probably was, but I'm not sure if anyone knew the impact the project would ultimately have on the Cuban people. I think they just saw a guy with a camera. Until I met Fidel’s sons, life wasn’t very easy down there. One of his sons is a photographer, and he invited me to sit down and talk. Eventually I got to meet more of the family. Maybe they thought it was okay for me to expose that hidden creative society because it was under their regime. Even though it was underground, I think Fidel Castro understood the value of a vibrant creative class.

Can you speak more to how your exhibition may have sparked change in their country?
In 2012 I was invited by the Fototeca de Cuba Museum to have an exhibition of the Habana Libre project, where I showed 90 pieces. For the first time, the Cuban people had a chance to see the world of the hidden creative class. About 4,000 people attended the opening, which was about 3,800 more than the museum typically would get. Several of the ambassadors came, as well as some of the Castro family. No one before this point had ever been allowed to photograph Fidel’s sons. They agreed to be interviewed, and to my surprise, they didn’t ask to edit anything. I think the exhibition had a positive effect on Cuba. Within a year of the exhibition, for the first time, all Cubans were allowed to own a home, start a business and travel freely. I keep in touch with a lot of the talented artists I met there, and they’ve said to me, “Thank you for letting us out.” It shows you the power of art.

Any other memorable moments from Cuba?
I met two women, Giselle and Rachel, an actress and a painter, and asked to photograph what their life looked like on a normal day. The next day they pulled up in a 1953 red Buick convertible. A policeman told me foreigners were not allowed inside the old cars there. So when I made this photograph, I was on the hood of the car, flying down the main street in Havana next to the waterfront and holding onto the windshield at 55mph.

Blunderbust and The Last Race

During most of my childhood I would spend Tuesday and Saturday nights with my dad and brothers at a local stock car race track on Long Island where there were 40 such tracks. By 2007, there was only one track remaining, which concerned me so I decided to make that racetrack my studio for five years as a way to reconnect with a simpler past – both mine and Long Island’s – and that mysterious beauty that I once witnessed. I went every weekend for two summers, and made a series of photographs that explored the subtle language of forms and images that this culture“speaks.”

Out of this came my first feature documentary film, The Last Race. As a visual artist I’ve approached this project like a renegade anthropologist, a fascinated outsider whose curiosity and respect has gained me access to this disappearing tribe of race car drivers and working class heroes. The Last Race is a cinematic portrait of a Long Island stock car track as its octogenarian owners struggle to maintain an American racing tradition in the face of a real estate development boom.

"As a visual artist I’ve approached [The Last Race] like a renegade anthropologist, a fascinated outsider whose curiosity and respect has gained me access to this disappearing tribe of race car drivers and working class heroes."

Critics have commented on how innovative the film’s form is. How did you accomplish this?
The film merges image and sound in a unique narrative form to bring the audience into the world of grass roots racing culture. The aesthetic and sensory experience of the film makes viewers become active participants. I wanted the audience to feel what it’s like to be a car, a driver and an audience member all at once. I had never shot a film before. It was technically very difficult. We welded 20 cameras on the cars and recorded over 4,300 sounds.

And what about the other car-related pieces you’re exhibiting at Sotheby’s?
At Sotheby’s we will be showing a car panel as a sculptural piece, an abstract painting, and a five-minute video installation piece. I worked on the art project for five years, then I worked on the film for another five years. To create the large abstract painted piece, I used a camera as a forensic tool to capture what happens when these cars crash, and a fender meets a door panel at 100mph, causing layers of 50-year-old paint to reveal fragments of each panel’s history. I also digitally paint the canvases and bring them to the racetrack with me, where they are embellished by the race cars themselves. 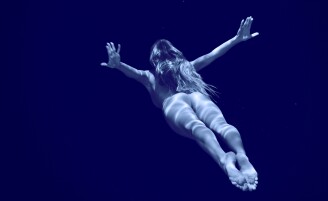 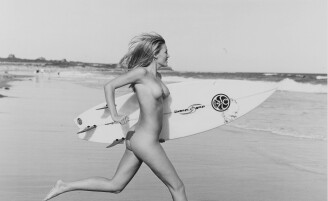