Celebrity haircolor authority Leland Hirsch was born into the beauty industry, but he has approached his work with the eye of an artist. “I came from a family who made hair-coloring products,” says the New York-born hair guru. “I wanted to color hair because I loved mimicking nature.” Since the 1970s, his collaborations with influential editors and photographers have appeared in top fashion glossies. Immersed in the world of fashion photography, Hirsch began to collect classic examples of the genre by the likes of Horst P. Horst, Richard Avedon and Irving Penn, and later, the convention-defying work of Diane Arbus. Photographs from his encyclopedic collection will be offered in A Beautiful Life at Sotheby’s (10 April, New York). Ahead of the auction, Hirsch spoke with Sotheby’s about how collecting has expanded his own definition of beauty, the challenge of difficult images and more.

LELAND HIRSCH WITH ART FROM HIS COLLECTION. SOTHEBY'S IS OFFERING 51 PHOTOGRAPHS FROM THE COLLECTION IN A BEAUTIFUL LIFE  ON 10 APRIL IN NEW YORK.

When did you catch your big break?
I became Redken’s consultant for interpreting color and making products in 1972. These were very exciting times in beauty, and Redken was very, very hot. I was recognized very early in my 20s. Shirley Lord, an editor at Vogue, had heard about me from the owner of Redken. She appreciated my creativity, and she got me my first story: a two-page spread in Vogue.

How did the connections you made through the beauty industry influence your love of photography?
It’s the exchange of ideas that I really loved about the beauty business. I was very visual and would come up with ideas for editors and photographers. I always loved Arthur Elgort’s photography. His specialty was shooting in a certain type of daylight. We met on a shoot, and I found out my father worked for his father. We became friends and later did this shoot in his studio where I put highlights through a model’s hair as she was swinging on a giant swing. As she came down, I’d apply bleach. We had a ball.

Regarding the photographs in A Beautiful Life, were you present for any of the shoots?
In the case of the Herb Ritts supermodels photograph, I wasn’t at the shoot, but I did Tatjana’s hair during that time.

Can you liken your process of developing haircolor products to art?
I connect with personality. Annie Leibovitz and Richard Avedon bring out the personality in people, and I would relate that to haircolor. Whether it’s his fur ads or coal miners, Avedon brought out the character of the human soul. In her photo session with John Lennon, Leibovitz brought out his essence. One of the first to have personality haircolor was Cyndi Lauper for True Colors. To me she’s an icon, and her orange hair completely reflected her personality.

What were some of the first photographs you collected?
The very first picture I collected was Avedon’s Dovima. I think the second was a platinum print by Irving Penn. They were my favorites. Penn is probably the most diversified photographer. He understood light, and no matter if it was black and white or color, his work always popped off of the page. I also love the contrasted beauty of his still lifes.

How did Arbus get into shooting drag queens, dwarfs, the mentally impaired? Maybe she saw the beauty in them. I thought, maybe it’s something I’m missing as a collector.

How did you begin collecting works featuring darker subjects, such as those captured by Diane Arbus?
The most unique thing photographically for me as a collector was the transition from fashion and beauty to Diane Arbus. She got into fashion with her husband and worked for Condé Nast, and then all of the sudden she broke up with him and went out underground. It was a story that started with beauty and went so left. In the same way that I have respect for Avedon shooting coal miners in Middle America, I'm fascinated by Arbus because of how she diversified. How did she get into shooting drag queens, dwarfs, the mentally impaired? Maybe she saw the beauty in them. I thought, maybe it’s something I’m missing as a collector. Maybe I should look into not being so narrow-minded.

Any works by Arbus in particular?
As a collector you want to challenge yourself. When I first saw many of these works, I didn’t like them. As I’d continue seeing them, I began to love them – take the gentle Jewish Giant, for example. He’s nine feet tall, and the parents so small. It’s so contrarian.

I also love political statements, like the boy with a toy hand grenade. The story is that the boy was from a very wealthy family, and yet here he is in Central Park with what appears to be a hand grenade. The obvious question: is that a real hand grenade? It’s intriguing, and I relate to that because I was a menace when I was a kid.

You also have some incredible images by Peter Beard. What attracts you to his work?
To me, the great photographers never commercialize. Peter Beard is a purist. He’ll find elements from the day and put them on a photograph, creating minimal collages. I love the works with his blood, including Night Feeder which I acquired at a Sotheby’s. His work is also very personal to me. I bought a first edition of his book The End of the Game, which I sent to Beard’s gallery to get signed. When the book was returned imagine my surprise to find it not only signed but also inscribed with a handwritten note and embellished with blood and little pictures – he even repaired a tear to one of the pages. I sent Beard flowers and champagne in Paris, where he was working at the time. I’ll cherish that book forever and never sell it. 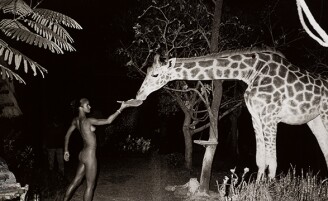 Past Auction
A Beautiful Life: Photographs from the Collection of Leland Hirsch
10 April 2018 | 10:00 AM EDT | New York 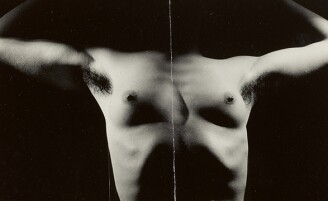