O nce held in some of the most esteemed American and European Private Collections and unseen for decades, Pascale Adolphe Dagnan-Bouveret’s monumental canvas, Madonna of the Trellis, will resurface at auction this November in Sotheby's European Art sale.

Long thought to be lost, Madone à la treille marks an important re-discovery within Pascal Adolphe Jean Dagnan-Bouveret's multi-faceted oeuvre. Painted in 1888, it is a magnificent example of French Naturalist painting, a genre that he would come to define, and it foreshadows the Symbolist influence that he embraced at the turn of the century as well as the later religious scenes inspired by Renaissance and Pre-Raphaelite artists. In the present work, Dagnan-Bouveret presents the Virgin holding the Christ Child in a verdant arbor, clad in pure white robes with golden haloes drawn as simple rings of light. Although the arbor is an unusual stage for the Madonna and Child in nineteenth century religious paintings, its origins reside in Italian and Northern Renaissance works by artists such as Fra Filippo Lippi and Lucas Cranach the Elder who included grape vines as allusions to Christ’s eventual sacrifice for mankind.1

Dagnan-Bouveret completed Madone à la treille on the grounds of his father-in-law’s home in Ormoy, France, within a special arbor that was constructed expressly for the artist (fig. 1). Here, he could situate his models for the Virgin and Child amidst the dense foliage, working quietly as if in his own Parisian studio. A documentary photograph shows the artist at his easel in situ with the partially unrolled painting in front of him (fig. 2).2  The painting’s evolution can be followed through initial tracings, small color sketches, and a preparatory photograph that recorded the actual models who posed for him (figs. 3, 4). In this photograph, the figures seem to float towards the viewer, as a kind of mystical and miraculous vision. Only one drawing for the painting is known, from the collection Carl von Stetten, Dagnan-Bouveret’s colleague at the École des Beaux-Arts. In the final painting, Dagnan-Bouveret has shifted from the muted mauve tonality of his oil studies to this extraordinary and unprecedented green and yellow palette, reflecting the sun filtered through the foliage and illuminating the whole composition with tenderness and light.

Madone à la treille was exhibited in Paris during the Salon of 1889 alongside Les Bretonnes au Pardon (Gulbenkian Collection, Lisbon, Portugal), another of the artist’s celebrated compositions. While these works earned him considerable attention from critics, many noted that the Madonna and Child within the setting of the green arbor would not be easily understood.3  In a letter to his friend Henri Amic, Dagnan-Bouveret explained that he tried to create an atmosphere, “filled with warm maternal love” set in an agreeable shaded garden.4  Other critics, in reference to Les Bretonnes au Pardon, commented on the ways in which Dagnan-Bouveret was simply expanding the scope of his career. The painting attracted further international attention when it was reproduced in Century Magazine and accompanied by Mary Mapes Dodge's poem, An Offertory, in 1891. Louis Comfort Tiffany adapted the composition in stained glass windows, two of which are still extant, one in the South Parish Congregational Church in Augusta, Maine, and another in the Church of the Covenant in Boston, Massachusetts (figs. 5, 6).5

While many details of the painting’s subsequent history have yet to be uncovered, it is possible that the first owner of Madone à la treille was the Chilean artist and diplomat Ramón Subercaseaux, a prominent collector and painter who had studied with Dagnan-Bouveret.6 He had arrived in Paris in 1874 with his wife Amalia y Errazuriz Urmeneta, herself from a prominent Chilean family, and developed close friendships with (and commissioned major works by) some of the most important artists of the period, including John Singer Sargent, Giovanni Boldini, James McNeill Whistler and Joaquín Sorolla. The painting later entered the progressive contemporary art collection of Georges McCulloch and then sold at his sale through Christie, Manson and Woods to Knoedler in May 1913 for the substantial sum of £1207. In July 1913, Knoedler then sold it to the American newspaper publisher and collector William Randolph Hearst, whose love for Old Master paintings and the theme of the Madonna and Child is well known.

After influencing the development of Salon naturalism, originally initiated by his colleague and friend Jules Bastien-Lepage, Dagnan-Bouveret reinvented himself with large-scale, deeply felt religious scenes.  By 1900, he had been elected to the Institute français, and his place as an academic painter had been officially secured.  Over a century later, the reemergence of Madone à la Treille  affords an opportunity to consider the work within the French Symbolist movement and vividly reestablishes the work as a landmark within the artist's remarkable career.

1. The author is indebted to Roberta Bartoli for pointing him in this direction.

2. For a mention of the painting and the origin of the setting, see Weisberg, Against the Modern, p. 97-8.

5. The window in the South Parish Congregational Church, Augusta, Maine was commissioned in memory of Eliza Smith Bradbury (1815-1879). The window in the Church of the Covenant, Boston was a memorial window commissioned by Albert Gallatin Wilbor, Jr. (1857-1920) for his parents Albert Gallatin Wilbor (1820-1895) and Elizabeth S. Grinnell Wilbor (1827-1907).  The two panel window was designed by Frederick Wilson and was in place when the church reopened in October 1894. 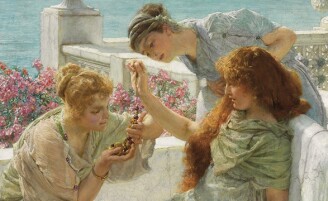