An Important Discovery of Jean-François Millet

A preparatory panel for The Metropolitan Museum of Art’s canvas appears on the market for the first time.

NEW YORK – Calling Home the Cattle, painted by Jean-François Millet in the late 1850s, shows the artist grappling with one of the most difficult artistic challenges he set himself: capturing the magnificent, fleeting effects as a fading sunset absorbs man, animals and landscape alike into a shimmering tapestry of half-light.  Uncertain edges, abrupt foreshortening, impossible distances, and undefinable colours endow the scene with an ineffable calm amid mystery.  Two distinct colours shape this world; the heavy grey of Apremont granite and the rich red of the now-absent sun permeate every element, underlining the moody Romanticism out of which Millet crafted his Realism in this critical decade. The event was a commonplace one -- the village herdsman calling together the small troop of cows which he managed on behalf of the various Barbizon households who owned animals but lacked the land to graze them – but it seized Millet’s imagination during his first years in the village and the theme held his attention for nearly twenty years as he sought a balance between line and colour that could convey the grandeur of the broad Plain of Chailly at twilight.

Calling Home the Cattle has been unknown to scholars until its recent rediscovery, having remained off the market for more than 125 years as it descended through the collection of a single American family.   A surprise (and then a challenge for the painting’s unusual techniques and striking colour effects), Calling Home the Cattle nonetheless claims a well-secured position among a group of three better documented Millet presentations of the same scene: a drawing of about 1854-57, lost since its publication in 1902 (fig. 1); a well recorded pastel of about 1866 now in the National Gallery of Art (fig. 2); and, most recognisable, the large painting from the last two years of Millet’s life, 1872-74, in the Metropolitan Museum of Art (fig. 3). The essential composition remained firm in Millet’s mind across the now-four known versions: a solitary cowherd, off-center on a low rise, blowing his horn to call home a train of cows that meander toward him through a curving defile.  But with each new work Millet reconsidered the spatial relationships among animals, man and landscape, and shifted the balance of his technical means as he worked to capture the mystical effects of twilight.  With his first version of the composition, the lost drawing (fig. 1), Millet placed the central scene of the herder and his dog in a well-defined middleground, against a low horizon and a spreading view of the vast plain behind. The conception of the drawing emphasises details and geographic precision over mood and mystery – the qualities Millet often remarked upon when recounting his near-daily walks out onto the great Chailly Plain as the late afternoon ended his work in the natural light of his studio.  When Millet took up the present painting a year or two later (probably in 1856-57 as he worked on a suite of similarly sized paintings of peasants in specific Barbizon settings), he made the very ambitious decision to collapse the compositional space and give greater prominence to the silhouetted herder and the bulky foreground cows. Reducing the foreground and eliminating the broad background plain shifted the art work’s direction from detail and specificity toward light effects and mood.

That Millet was focused on keeping the resulting composition readable is evidenced in the still visible broken or reinforced outlines of the silhouetted figure and the overlapping cows.  Millet valued the underdrawings of his paintings (based as they usually were on dozens of preliminary sketches and studies) and he often maintained the particularly significant edges uncovered until the last moment.  This would have been especially important in Calling Home the Cattle as he orchestrated such a distinctly controlled colour arrangement of reds, browns and greys, within the challenge of evening’s half-light.  The painting was set aside, just short of completion, probably around 1860 as the artist’s attention turned to the demands of a particularly compelling painting contact.  When next Millet addressed the theme of the village herdsman, in the medium of a pastel drawing (fig. 2), in 1866, he combined strategies from both the earlier drawing and the uncompleted painting. Finally, in 1872, Millet began his last version of the subject, the painting now in the Metropolitan Museum (fig. 3).  In the airier expanse of a much larger canvas, he took up the essential composition of Calling Home the Cattle but opened up the space once more, with the particularly distinctive effect of bringing to the surface of the painting his original drawing by overdrawing with a heavy reed pen and ink-paint concoction, working what had been the incidental outlines of the smaller painting into the proper fabric of the larger work.

Calling Home the Cattle is an unfinished picture, thus unsigned.  Instead, it is stamped at lower right with a red cachet of the artist’s initials J.F.M. This metal stamp was originally created in 1875, following the artist’s death, to mark and thus authenticate unsigned works on paper left in Millet’s studio.  (A stencil, rather than a stamp, was used at that time to mark paintings.)  The common practice for French artists’ sales called for such stamps and stencils to be destroyed after the estate sale to prevent their misuse; however, possibly because the Millet family maintained a significant cache of the artist’s drawings outside the sale, this stamp of the initials was preserved within the family.  The presence of the stamp on Calling Home the Cattle and the unrecorded painting’s early appearance in Boston in 1891 strongly suggest this work came directly from Millet’s widow’s collection. Millet’s brother, Pierre, is known to have travelled to both New York and Boston in the early 1890s, seeking to place a select group of Millet works in private collections already featuring the artist’s paintings and pastels. Francis Bartlett, of Beacon Street, Boston, a prominent lawyer and widely travelled collector of books, nineteenth–century French paintings, and Old Master portraits, had been a friend and patron of William Morris Hunt, the Boston painter who befriended and supported Millet many years earlier.  That Bartlett owned the painting in 1891, when he lent it to the young Museum of Fine Arts’ strongly suggests that Bartlett had acquired it directly when Pierre Millet came to the city to arrange the acquisition of the Millet self-portrait which a group of collectors purchased on behalf of the Museum. 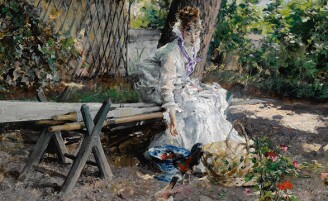 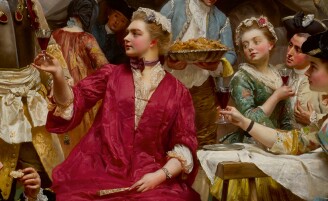