An Ho and Her Poetical Work of Art

An Ho’s landscapes are her own poetical fantasy, part memory, part dream, with the quality of a dream that is more perfect than reality.  Her visions are derived from observing nature closely, but creates a separate reality that expresses her tranquil understanding of the harmony between man and nature.

In 1944, An Ho was introduced to the artist Pu Ru who took her as his student and protégée. The guiding principles of Pu Ru's teaching laid in a belief that the practice of Chinese painting should put as much emphasis on an artist's personal character as the quality of the work itself. An Ho studied painting techniques that had been forgotten over the centuries, revitalised an art form that had always been considered the pinnacle of Chinese art, and became one of the leading living practitioners of these ancient artistic styles. Click ahead to read some of An Ho’s reflections on Pu Ru and his art. Ahead of Sotheby’s New York Asia Week, we invited An Ho to talk about her aesthetic as an artist and what was it like learning from one of China’s most famous traditional Chinese painters and calligrapher of the modern era.

AN HO, THE BLOSSOMING BOUGH, INK AND COLOR ON SILK. SIGNED AN HO WITH TWO SEALS: AN HO, WENYING.

How did you originally discover your passion for art?

To be an artist, one has to be reflective, learned in literature, kind in heart, and embody the spirit of a poet and the courage of a hero.

Do you remember the first piece of art that made an impact on you?

In Chongqing during the war, I was taught Chinese classics and Confucian philosophy by my father and calligraphy by a family friend. It was at this time that I became enchanted by a fan painting from my father’s collection of a female figure rendered in meticulous detail. When I discovered that the Qing dynasty artist was a seventy-year old woman, I decided to become an artist.

Tell us a little bit about your art teacher. What was it like learning from one of China’s most famous traditional Chinese painters and calligrapher of the modern era?

Master Pu Ru was one of the princes of the Qing royal family. He made a living as a poet, calligrapher and painter.  I began my studies, not with painting, but with classics and poetry to cultivate my character. Pu Ru believed that only after the spirit was nurtured could the hand be properly trained in the use of the brush, first for calligraphy and then finally for painting techniques.

How would you describe your aesthetic as an artist? What inspires your aesthetic, and how has it evolved since you began working? Are you drawn to any artists or in particular?

I began seriously copying old master paintings in the early 1950s researching artists of the Tang (618 – 906 AD) and Song (960 – 1279 AD) dynasties, and seeking out experts in their ancient techniques under whom I could study. I rapidly mastered the ancient techniques such as the “floating thread and bending wire” becoming the finest living practitioner of these vanishing styles.  I also became acquainted with the works of other artists such as Dong Yuan (c. 934 – c. 962), Ni Zan (1301–1374), and Wen Zhengming (1470–1559), who remain my favorites today.

Can you share any past/current projects with us? Tell us about your most recent artwork.

My flower paintings are the products of close observation of nature.  The result, however, is the creation of a separate reality, a translucent vision of soul-soothing lines and colors.  The changing seasons, with their individual enchantments and unique sensibilities, inspired my interest in landscape painting which gradually became the central focus of my painting, paying special attention to misty scenes.  Living in Woodstock, NY has been a remarkable inspiration these past few years. At 90 years old, I integrate inspiration from nature and the inclinations of my heart in creating my latest painting series. As the Tang dynasty painter Zhang Zao wrote: Art grows when learning from nature while cultivating the intrinsic mind.

Slideshow: An Ho Remembers Her Teacher, the Artist Pu Ru 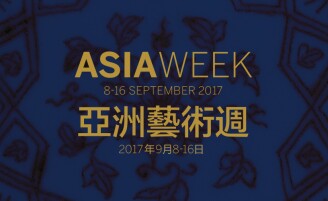