A Royal Tradition: The History of the Order of the Garter

Debate surrounds the origins of the Most Noble Order of the Garter, although it can be agreed that it is the oldest Order of Chivalry in the world, having been established by Edward III in c1348, dedicated to the image and arms of St George.  The annual Service of Thanksgiving on Garter Day in mid-June continues to be held at St George’s Chapel, Windsor Castle.

The service is preceded by an investiture of any new Knights, at which the Knights Elect receive their Garter regalia, then a luncheon and a procession.  This is attended by the Sovereign and Companions of the Order which consist of twenty four Knights, the children of the Sovereign as Royal Knights, and such additional ‘Stranger Knights’ or ‘Foreign Knights’ as are appointed by the Crown.  Appointments to the Garter are in the personal gift of the Sovereign and regarded as the most prestigious of the chivalric orders.

The insignia of the Order has developed over time.  The Garter, the symbol of the Order [Lots 23; 27; 30], is a unique item of regalia worn on the left leg below the knee, the origins of which are uncertain, as is the Order’s motto Honi Soit Qui Mal Y Pense (Shame on Him Who Thinks Evil of It) which has been embroidered onto the blue velvet garters in gold thread since the early fifteenth century.

By the end of the fifteenth century a collar had been added to the regalia, possibly as a result of the influence of foreign Orders where a collar was worn to form a badge. The collar design has changed very little since its introduction being composed of a series of gold heraldic knots and roses encircled by the Garter, with a hanging pendant of St George slaying a dragon, known as the Great George.  As for other British chivalric orders, the collar is worn on ceremonial occasions and designated Collar Days throughout the year.

Over time the collar came to be regarded as an encumbrance during ordinary activities and by the early sixteenth century the first reference can be found to the Lesser George [Lots 24; 28], an image of St George encircled with the Garter worn as a separate badge. Lesser Georges were originally hung from a blue ribbon around the neck so as to be worn upon the breast. But by the late seventeenth century it had become practice to sling the Lesser George under the right arm, a contemporary chronicler explaining that this was for ‘conveniency of riding and action’.

The riband was thereafter worn over the left shoulder and under the right arm as a wide sash [Lot 26].  The Lesser George and riband are now worn on all formal occasions when the collar is not used, as is the Garter Star [Lots 25; 29] which originated in 1626 as a more informal item of regalia required to be worn by Knights Companions whenever they were not wearing their robes.

From the earliest days of the Order of the Garter, the mantle, a ceremonial robe worn by the Sovereign and Knights Companion, has been an essential item in the Order’s insignia.  The all-embracing deep blue velvet cloak fastened with blue and gold cordons has remained largely unchanged since the foundation of the Order.

Ede & Ravenscroft established its robemaking business in the seventeenth century and has continuously produced the mantles used in the Garter Ceremony, the company archives detailing robes made for installations to the Order in its first extant ledgers from the mid-eighteenth century.  The earliest recorded orders for Garter mantles in 1749 include separate fees for ‘attendance at Windsor for self and servant’, indicating that the robemaker was required to attend in person to the Knight’s robing prior to the ceremony.  Ede & Ravenscroft continues to this day to provide robing services at Windsor for the Royal Family and Knights Companion at the annual Garter Ceremony.

From the eighteenth century to 1946, the Sovereign was advised on appointments by the Government, and Ede & Ravenscroft’s late nineteenth century records reveal the role the Garter played in international affairs as a means of securing overseas alliances. Between 1842 and 1882 the company made Garter mantles for twenty foreign rulers, including Emperor Napoleon III of France; Emperor Alexander III of Russia; the Kings of Denmark, Hellenes, Italy, Netherlands, Portugal, Prussia, Sardinia, Saxony, Spain and Sweden; and the Shah of Persia.  In 1877 the company provided robes for Prince Wilhelm of Prussia, later Kaiser Wilhelm II, who had his Garter appointment annulled in 1915.

During the twentieth century the Order reverted to being non-political, and in 1987 a statute issued by Queen Elizabeth II permitted women to be appointed full Companions of the Order.  Currently eight foreign rulers are also Knights or Ladies of the Order and Ede & Ravenscroft provides for them as necessary.

Gemma Field is an Archivist at Ede & Ravenscroft 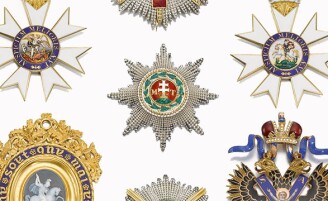