I f racing is the ultimate test of any high-performance machine, certainly the ultimate test within racing is the endurance race format. Even with a garage-full of spare parts, if the race car in question wasn’t constructed with quality, the team won’t stand a chance of winning. The same, of course, could be said for every component onboard, right down to the chronograph on the driver’s wrist.

From the 1930s, Rolex tachymeters have been favored by drivers for their accuracy, durability, and readability during high-speed driving. The famed Daytona series was not merely a marketing association, but born out of a collaboration with racing drivers such as Sir Malcolm Campbell, who proudly wore his Rolex during his nine world-record setting high speed runs – five of which took place on the sands of Daytona Beach, Florida.

The two Rolex Daytona Chronographs offered for auction were not merely used by Kirkland, Washington-born professional racing driver Christopher “Chris” Bingham – they were earned by him for winning the overall championship for the GTS class at the end of the 2001 and 2002 seasons. As Rolex was the title sponsor of the series, it was fitting that the trophy for victory at the end of the season was a custom-engraved Daytona, with the series logo “Grand American Rolex Sports Car Series” etched into the caseback.

The 2002 example is more universal, only reading “GTS Champion 2002,” while the 2001 edition is engraved with Bingham’s name and seems to have been put to use. One has to wonder if it saw any time at the track. Either way, the typical debate among Daytona owners – whether the watch dial is more readable with a black or white dial – was sufficiently put to rest by Bingham by winning twice in a row.

Especially in 2001, the second running of the Grand American Rolex Sports Car Series, victory for Bingham was far from certain. The main media story from the opening race of the series was that Dale Earnhardt and Dale Earnhardt Jr. were teaming up together to compete for Corvette Racing. Though those plans sadly did not come to pass after Earnhardt’s untimely death later that year at the Daytona 500, the duo finished the opening race at the 24 Hours of Daytona in a respectable fourth place. Bingham’s team car, a Dodge Viper GTS-R, started 33rd on the grid, suffered accident damage and did not finish the race.

Not one to suffer setbacks, Bingham switched to Fordhal Motorsport and came roaring back the following race, winning the Nextel 250 at the Homestead-Miami speedway. He won a six-hour endurance race at Watkins Glen, another 250-mile race at Mid-Ohio, a 500-mile race at Road America, and a 225 km race at the Circuit Trois-Rivières in Quebec.

Fordhal Motorsport was then running the apex predator of American Supercars – the Saleen S7R, a mid-engined racer was powered by a full-blooded Ford 7.0L V-8 engine that could rev to 7,000 rpm and was comfortably rated by the factory to produce “at least 600” horsepower. The carbon fiber bodywork and tube-frame chassis added up to a mere 2,530 lbs – and that included a 330 lb. ballast mandated by race regulations. Though the Saleen proved to be more durable and capable than Bingham’s previous car, the S7R was still a raw race car, offering no power steering or traction control to aid the driver. For Bingham’s team to win, nothing less than superior driving skills were required. 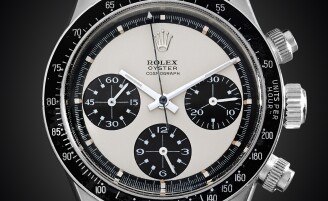 The two final races were returns to Watkins Glen and Daytona, albeit for truncated lengths. After handily winning the Bully Hill Vineyards 250 Miles, Bingham and the Fordhal team had only a three-hour race, the Grand Prix Finale, before they could claim victory. With all that happened over the season, the return to Daytona International Speedway must have felt monumental for Bingham. When Bingham and teammate Johnson raised the trophy for victory at the victors podium at the end of the race, capping off an impressive season and earning the overall victory at the GTS class, there was nothing left to do but do it all again the following year.

The two watches offered for auction represent the combined efforts of that comeback season, symbols of Bingham’s impressive skills as a driver. As multiple Rolex winner Scott Pruett said “If you win a trophy, it sits in your trophy case. However, when you win a Daytona, with “Winner” engraved on the back, there’s nothing more special.” This is an opportunity to take home a truly special timepiece, offered to a select few in the winner’s circle. At least according to Pruett, “There’s no current driver or past driver who wouldn’t say the most memorable thing you can take away from this race is the watch.”