As her advocacy organisation Every Mother Counts celebrates its 10th anniversary with an online charity auction at Sotheby’s and a star-studded virtual gala, Christy Turlington Burns continues her decade-long fight for better maternal care around the world.


C hristy Turlington Burns sees an unexpected silver lining in 2020. Every Mother Counts (EMC), the maternal health and childbirth advocacy organisation she founded in 2010, has been at the forefront of the call for policy reform for years. Now, amid the pandemic, with the wellbeing of expecting mothers facing new challenges and obstacles, the iconic model and activist sees hope for lasting change.

“People are finally understanding how essential this care is,” she says. In the past months, New York governor Andrew Cuomo’s office turned to EMC for policy recommendations on childbirth safety. Turlington Burns, meanwhile, was enlisted to the city’s newly founded Covid-19 maternity task force.

The New York–based nonprofit has grown to have a global reach that Turlington Burns might not have imagined when she set out a decade ago, but which, she believes, echoes the scope of the worldwide childbirth safety crisis.

To date it has invested some $17 million globally. This December, it will celebrate its 10th anniversary with its annual fundraising gala LoveEMC, this year as a livestream with musical performers and special guests, emceed by the fast-rising comedian Erin Jackson and accompanied by an online auction hosted by Sotheby’s.

“I had this ‘aha’ moment where I realised that had I given birth in a rural community, outside of a major city, away from a big hospital, I would have probably bled to death”

The mission of EMC remains personal for Turlington Burns. In 2003, she gave birth to her first child, daughter Grace. The birth went smoothly until about an hour after delivery, when she experienced a postpartum haemorrhage. She lost several litres of blood, and “experienced a lot of pain, but because of active management [from her midwife and backing physician], I knew both my daughter and I would be fine,” says Turlington Burns. Though she never felt her life was at risk, the close-call sparked a journey of self-education for the new mother.

“I knew childbirth would teach me a lot, but in those couple of weeks after returning home, I started to see friends and share my experience. People told me incredible stories about similar experiences of haemorrhage, or pre-eclampsia or other complications to either themselves or their child,” she recalls. “I learned that hundreds of thousands of women died in pregnancy and childbirth [every year] to this day. That just shocked me. I thought that in the 21st century, this must be a very rare event, but those numbers really hadn't budged in decades. I wondered what happens when women without resources and options experience complications and require safe, quality care.”

This knowledge inspired a new life’s work: to ensure that women around the world receive quality, respectful and equitable maternity care. In the years that followed, Turlington Burns studied public health at Columbia University Mailman School of Public Health, and gave birth to a second child, son Finn. In 2010, after years of research, travel, storytelling and filming, she released No Woman, No Cry, a pivotal documentary following the experiences of four pregnant women around the world, which received wide-spread acclaim and drew new attention to the struggles women face in securing childbirth care.

“A gorgeous Versace gown made for Cindy Crawford is one lot I’m looking forward to. There will be some stunning jewels too”

“I had travelled with an NGO to Central America prior to making the film. I was six months pregnant at the time and I had this ‘aha’ moment where I realised that had I given birth in a rural community, outside of a major city, away from a big hospital, I would have probably bled to death,” says Turlington Burns.

She founded Every Mother Counts that same year, recognising that she had a platform and position to provide the sustained attention necessary to bring about change. While EMC centres much of its work on some of the nations with the highest childbirth mortality rates around the world, namely Guatemala, Bangladesh, Haiti, India and Tanzania, partnering with local women-led organisations, it also does incredible and necessary work at home in the United States. “The US is one of just two industrialised nations with a rising maternal mortality rate,” Turlington Burns says.

Part of that work has been about educating and alleviating the racial disparities of care. “All women are vulnerable, but there is extensive research that shows African-American women are three to four times more likely to die from a complication related to pregnancy and childbirth than a white woman in this country. In New York City, African-American women are at 12 times greater risk of death. Native-American women have a two times greater risk. In the film, I think people were surprised to learn that more than 50% of deaths in the US are preventable.”

Pre-existing health conditions, lack of access to obstetric care and implicit bias all factor into the situation. “There are so many women in this country who don't feel that they have a voice and who are not listened to. We've heard it time and time again and have seen through studies that often women know something is wrong and no one pays attention,” Turlington Burns says.

Policy reform has been at the heart of the work in the United States, with EMC campaigning for legislation including The MOMMIES Act and the Maternal CARE Act that would fundamentally change how women access care there. “Before the Affordable Care Act, many women had no health insurance. The cost of giving birth and starting a family can put people in dire financial positions as soon as a child is born,” says Turlington Burns. “It also meant many women had no prenatal care.”

But Turlington Burns has seen this year as a benchmark of success. “Before Covid-19, when talking about disparities of care, people could gloss over and not fully understand the social determinants of health. But these disparities have been highlighted and people have a greater understanding of what public health is, why the health of another person impacts a community.”

Throughout the past months, EMC has been working to provide PPE to doctors and nurses along with the necessary technology for both women and healthcare providers to make remote care and telemedicine possible. At the height of the pandemic in New York City, it even helped to establish the only freestanding birthing centre – a midwife-led facility that offers an alternative and more homely environment in which to give birth than a hospital – in Manhattan.

Now Turlington Burns wants to celebrate the accomplishments of the past 10 years – and keep the momentum going for the one ahead. December’s LoveEMC fundraiser will be an opportunity for both. “A hundred percent of the proceeds from the auction will be going toward funding our goals for the next year,” says Turlington Burns, who is enthusiastic about the lots. “A gorgeous Versace gown made for Cindy Crawford is one I’m looking forward to. There will be some stunning jewels and fun live experiences, too. We’re delighted to be partnering with Sotheby’s for LoveEMC.” Among the don’t-miss lots are: a pair of gold hook earrings by designer Shaun Leane, a private fireside chat with fashion icon Donna Karan, and a virtual cooking class for 12 led by chef Dan Kluger .

Every Mother Counts believes next year will be one of incredible strides. “People have made a connection to health in a deeper way than ever before. Public healthcare has an upside for the whole community – everybody benefits. When the health system thrives, so does society,” says Turlington Burns. “We can’t wait to see what the next year will bring.”

Every Mother Counts’ LoveEMC Charity Auction will be open on sothebys.com from 1–7 December. 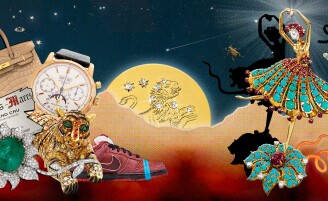