A Milestone For Contemporary Art In China--The Grass Society

A lthough less well known than the 1979 and 1980 ‘Xingxing’ (Star Star) exhibitions in Beijing, the 1980 CaoCao She (Grass Society) group exhibition in Shanghai was a milestone for the emergence of contemporary art in China. Led by Chen Jialing (b. 1937) and Qiu Deshu (b. 1948), the exhibition was immediately denounced for its 'abstract tendencies' and Qiu was severely criticized as the leader of the independent initiative. Ironically, the following year paintings by Jackson Pollack from the Museum of Fine Arts Boston were exhibited in a major display at the Shanghai Art Museum, from which Chen, Qiu and contemporaries gained confidence in their commitment to abstraction and pursuing innovation. Such early examples collectively represent a dynamic moment in China’s history when creativity began to flourish after decades of isolation and was untarnished by marketplace incentives.

Despite an absence of formal art academy training, Qiu Deshu is exceptional in his early revolution of upending formal elements of ink painting. He not only reinvents the use of shuimo (water ink) but also transforms the physical properties of paper into his distinctive collage language. His brushstrokes are not read in the traditional way of Chinese painting, but rather as a kind of fissuring that are analogous to a primal language of the universe. Empty No. 1 (1982) is a bold deconstruction of ink painting in its gestural, abstract ink-wash and display of torn seal marks as focal elements.  Considering the seal mark as a symbol of the self in China, he sought to break through the confinement of cultural tradition. His formal breakthrough with his distinctive fissuring technique began in 1982 with the added element of dense colour and torn paper collage. The twisted, vibrant forms in Rift and Cracks No. 12 (1988) seem to be human portraits caught in abstraction and exude a metaphorical release of great energy through high contrasting colours on canvas and ripped paper.  Such anthropomorphic imagery is most representative of this period for the artist’s creative development.

Chen Jialing was the teacher of Qiu Deshu and inspired by the young idealist.  Together they pursued the combination of Chinese ink and Western watercolor to create a new style. Chen’s works are earnest explorations of traditional painting themes, namely bird and flower motifs and landscapes. Distinguished by a soft, layered ink wash, his compositions capture a moment of tranquility. At first glance, the aesthetic is unassuming but in context of his oeuvre, his works are consistently masterful in their boundless variety, carefree character, pursuit of individuality in extreme exploration of a new ink style. He attributes his artistic practice and evolution to his observance of the principle of 'transformation' symbolized by the lotus motif.

Ink Lotus (1984) and White Lotus (1990) were exhibited together as examples of Chen’s work from this formative period in Light Before Dawn (2013) and Blooming in the Shadows (2011) at Asia Society, Hong Kong and China Institute, New York, respectively. The illuminating exhibitions shed light on the lesser known artist groups of China in the 1980s and the milestones for the development of contemporary art. Although the Grass Society exhibition was shortlived, the group remains a testament to Shanghai’s engagement with European modernism and early experiments in contemporary ink painting in China. 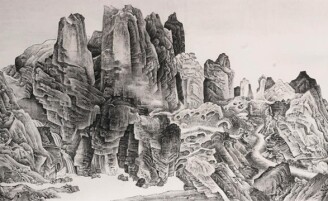