A Menagerie in the Middle East

A n exceptional illustrated example of the Kitab hayat al-hayawan – Book of Animals – is one of the highlights of Sotheby’s upcoming sale of the Shakerine Collection. Created by Muhammad ibn Mūsá al-Damīrī in 1372/73 in Cairo, this encyclopedia of animals delivers a literary menagerie of some 1,000 beasts, from horses and hounds to lions and herons.

The book is as enigmatic as it is alluring, as Chiara De Nicolais, Sotheby’s specialist in the Middle East Department, explains: “This is not a bestiary, or a book on zoology and not even a book in which animals are used for moral purposes. It is very difficult to define.” The animals featured are those which appear in the Qur’an and other areas of Arabic literature: snakes slither and crocodiles crawl over its pages, hawks flutter overleaf. “My favourite animals are the camel and the crocodile,” notes de Nicolais, “just because they have such fun drawings.”

There are three editions of the book – long, medium and short – produced in both calligraphy and print. This elegant and complete calligraphic version is more than 500 pages long and made more exceptional by its many illustrations. Its author, Al-Damiri, was very much the Renaissance man of 14th-century Egypt. He was variously a tailor, theologian, scholar, legal eagle and naturalist. However, the Kitab hayat al-hayawan remains his most famous achievement.

It is a book that is difficult to pin down and even harder to put down. It has been popular for some half a millennium. It has been translated into Ottoman Turkish, Persian, even Latin. In the 19th- and 20th-century copies were printed in Cairo, and English editions were published in London and Bombay at the turn of the 20th century.

The treatise is arranged alphabetically by animal. This complete version is particularly special because for each animal the author addresses a variety of unusual aspects: the etymological origin of the name of the animal, its physical characteristics and habits, its literary tradition, medicinal and other properties and its juridical status within the Shariʿa. The book even explains the significance of individual animals when they appear in your dreams. We all know the point of counting sheep; now we can learn what it means to dream about dodos. 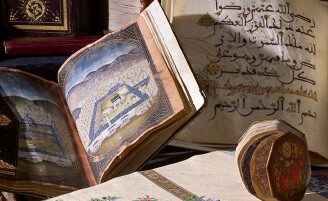 Past Auction
THE SHAKERINE COLLECTION: Calligraphy in Qur’ans and other Manuscripts
23 October 2019 | 10:30 AM BST | London
Islamic Art