NEW YORK – Since 1901, the Nobel Prize has honoured men and women whose outstanding achievements are "for the greatest benefit to mankind." With numerous contributions to game theory, including the Nash equilibrium – applied to fields as diverse as economics, banking, defense, politics and evolutionary biology – John F. Nash Jr. was a more than worthy recipient of this prestigious award. A mathematical genius with graduate degrees from Carnegie Tech and Princeton University, the brilliant Nash received the Sveriges Riksbank Prize in Economic Sciences in Memory of Alfred Nobel in 1994 by the Royal Swedish Academy of Sciences, and on 17 October, Sotheby’s has the privilege of offering Nash’s award in Economic Studies for his formative work on Game Theory to the public in a single-lot sale in New York with an estimate of $2,500,000–4,000,000.

Selby Kiffer, Senior Vice President, Books & Manuscripts, noted: “It has been very gratifying to work with the Estate of John F. Nash Jr. to bring this extraordinary man’s Nobel Prize to auction. Nash’s insights into game theory have become so pervasive that they affect our daily lives in ways in many ways, whether or not we are fully cognizant of the operation of the ‘Nash equilibrium.”

"Through the [2001 Academy Award-winning] film 'A Beautiful Mind' and Nash’s later work in the area of mental health, he has become a symbol of the triumph of the human spirit as well as an icon of twentieth-century mathematical thought."

For John F. Nash, the accolade of the Nobel Prize was a transformative event, particularly in the context of his struggles with mental illness. During an interview at a 2004 meeting of Nobel Laureates in Economic Sciences, Nash acknowledged that the Nobel Prize “had a tremendous impact on my life, more than on the life of most Prize winners because I was in an unusual situation. I was unemployed at the time…And so I was in a position to be very much influenced by the recognition of my earlier work…I had become widely known, but in a sense it wasn’t officially recognized. I was quoted very frequently in the literature of economics and mathematics, but it’s quite different to get official recognition.”

With its gold medal in its original red morocco case, accompanying calligraphic diploma with an original watercolor drawing by Bengt Landin, the original box and attaché case for the diploma, and official letters from the Nobel Foundation and the Royal Swedish Academy of Sciences, John F. Nash, Jr.'s 1994 Nobel Memorial Prize in Economic Sciences is one of the most complete documentations of the Nobel Prize to ever be offered for auction. 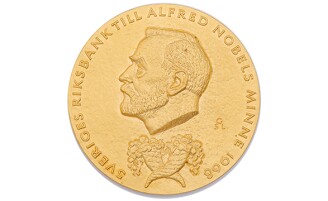