A Masterpiece Fit for a King: George III's Breguet Pocketwatch

O ne of the most magnificent and important watches made by Breguet, the present lot has survived in extraordinarily original condition and, together with its Royal provenance, is without doubt one of the finest examples of the great master’s work.

Abraham-Louis Breguet is believed to have invented the tourbillon in 1795, whilst living in self-imposed exile in Switzerland; fearing for his life during the Reign of Terror, Breguet had left Paris in August 1793 together with his son and sister-in-law. In Switzerland Breguet suffered from a lack of tools and materials which hampered his production, however, he used this period to develop some of his most ingenious inventions, in addition to the tourbillon these included his perpetual calendar, ruby cylinder, sympathique clocks, constant force escapements and montres à tact (see: Daniels, The Art of Breguet, p.7).

Breguet returned to Paris on 20 April 1795 and the patent application for his tourbillon device is dated 1801. Breguet made his first tourbillon watch (no. 22) in 1800. His second tourbillon watch, numbered 169, was made in 1808 in homage to Breguet’s friend and fellow watchmaker John Arnold; Breguet presented the watch to Arnold’s son, John Roger Arnold, on 30 April 1809. Both of these early tourbillon watches had rotating carriages of one-minute duration.

In common with no. 169, Breguet’s four-minute tourbillon watches had balances beating at 21,600 vibrations per hour - this improved the watches’ rates and meant that they were less susceptible to variations caused by the motion of the owner as the watch was being worn. Although this higher beat rate would usually require a stronger mainspring, as Daniels explains, Breguet’s introduction of the four-minute carriage in place of the one-minute carriage compensated for this change (for a technical explanation, see: George Daniels, The Art of Breguet, 1975, p.71).

Research suggests that the present watch, no. 1297, may well have been the first sold – the Breguet Archives note that 1297 was sent to Recordon for the King of England on 29 June 1808. Of the four-minute tourbillons from this series currently known, the present example is the only one to have a dial labelled in English. Rather charmingly, this is the only watch from the group that is therefore labelled as a “Whirling About Regulator”, a literal translation from the French “Régulateur à Tourbillon.” All watches so far identified from this series have indications for constant seconds, as well as a timing seconds dial and sector for power reserve indication.

No. 1297, the present watch, is the only example from the group known to have the addition of a thermometer; the original price of FF 4,800 noted on the Breguet certificate, which appears to be the highest figure paid for any of the watches from this series, may be due to this additional feature. No. 1297 is also the only watch to have each of its indications clearly labelled in writing to the dial. All other examples seen from the series have only the writing “Régulateur à Tourbillon” and the signature “Breguet et Fils” to the dial, with the exception of no.1188 which has a later white enamel dial with signature but without mention of the tourbillon.

Breguet no. 1297 is also notable for its use of a Robin escapement. At the time of publication of Daniels’ book, The Art of Breguet, no. 1297 would appear to have been unknown to the author. In his book, Daniels states that “In use the tourbillon fulfilled his highest expectations and was made in limited numbers with lever, Arnold spring detent, Peto cross detent and Breguet’s own naturel escapement” [see op.cit. p.70]. It would therefore seem likely that Daniels’ research had not revealed a Breguet tourbillon with Robin escapement. Indeed, it is interesting to note that from this series of four-minute tourbillon watches, with the sole exception of the present watch and no. 2396 which has a lever escapement, all are fitted with Breguet’s échappment naturel.

The Breguet archives note that the present watch was sent to Recordon for the King of England on 29 June 1808. The Breguet certificate details that the case was decoratively engraved by Tavernier with the sun-ray design and the letters G & R with the crown of the King of England. At the time of the watch’s manufacture, the Napoleonic wars (1803-1815) were ongoing and it is therefore quite remarkable not only that the watch was ordered but that it was delivered at all. Under Napoleon’s ‘Continental System’ and his Berlin (1806) and Milan (1807) decrees, a naval blockade of the British had been declared and the French, their allies and occupied lands were forbidden to trade with the UK. For the King of Great Britain to purchase a French watch during this period would have seemed unthinkable.

Of course the watch was supplied via Breguet’s London Agent, Recordon, and so a direct connection between the King and a French product may have been avoided, yet quite apart from the sensitive nature of the order, the risk of sending such a valuable watch between two warring countries must have been a significant concern for both Breguet and Recordon; presumably, the chance of the watch’s seizure was a real possibility. 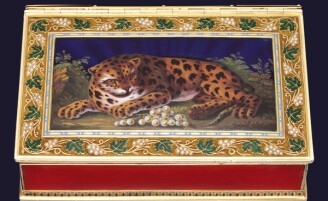 It is interesting that the cuvette is unsigned and has a vacant cartouche, of course the dial and movement are signed by Recordon but the only visual indication that the watch owes its production to Breguet is the signature located on the tourbillon carriage, and this is in such a discreet location that it is unlikely to have been detected during a cursory examination of the watch. The inside case back has prominent English hallmarks and the mark of the English based case maker Louis Comtesse who was based at 13 Batemans Buildings in Soho, London. By contrast the mark of Breguet’s case worker, Tavernier, is both small and discreet. In other words, were the watch inspected upon delivery to the King, it could easily have ‘passed’ as an English made watch. However, it seems unlikely that the King would have been unaware of the true origins of the watch.

In 1810 King George III who had previously suffered from a serious mental illness relapsed, being unable to continue in his duties as King, on 5 February 1811 his son the Prince of Wales became Prince Regent by an Act of Parliament. The Georgian Papers contain a bill ‘reminder’ (GEO/25792) from 1812 which is directed to the Prince Regent and lists three Breguet watches and a Breguet clock for which payments remain outstanding. The first in the list is the present watch, no. 1297 and the invoice notes the watch was originally billed on 22 October 1808 with the sum of £280 outstanding.

The remaining three Breguets are shown as having been invoiced between October 1808 and November 1811, the total outstanding being £997. The invoice continues with annotations showing part payments beginning in March 1812 (£297). A letter written by Breguet’s agent Moreau to Colonel McMahon on 29 March 1813 (RA/25862) pleads for the latter’s assistance in obtaining the outstanding balance of £700 due to Breguet from His Royal Highness.

Indeed, Moreau continues “I hope Sir considering the time elapsed, and when you reflect that my departure from this country cannot possibly take place unless this affair is settled, all these reasons...will induce you to procure me the settlement of my account.” It seems he was successful in his application, since the annotations to the ‘reminder bill’ of January 1812 show that a payment of £300 was made in May 1813 with the final balance of £400 paid in October the same year.

George III (1738-1820), King of Great Britain and Ireland, was the eldest son of Frederick, Prince of Wales and the grandson of King George II. Though chiefly remembered for the American War of Independence, he was nevertheless a great patron of the arts. After his father’s death in 1751, he was educated under the care of his mother and the head of his household, the Earl of Bute. It was most probably the Earl who stimulated his enthusiasm and laid the foundation for the King’s remarkable collection of scientific instruments, clocks, watches and books. At his Luton Hoo estate, the Earl had a cabinet of mathematical and philosophical apparatus which was reputedly the most complete of its kind in Europe.

The young and impressionable Prince may have wanted to emulate this example and on his accession, he appointed George Adams to be his Mathematical Instrument Maker, commissioning Adams to make pneumatic and mechanical instruments. As a young man, King George III was given instruction in watch work and notes that he made on the subject as part of his education were lent by Her Majesty the Queen to section 6 of the 1955 Exhibition, Five Centuries of British Timekeeping, held at Goldsmiths’ Hall; the present watch, lent by Malcolm Gardner, was included in section five of the same exhibition.

George III’s love of horology was such that, in 1770, he acquired from Thomas Mudge the first watch with a lever escapement. During the 1770s, the King became involved in a long running dispute between John Harrison and the Board of Longitude over tests for Harrison’s chronometer. On 31 January 1771, Harrison’s son William was received and interviewed by the King, who is recorded to have remarked: “these people have been cruelly treated...And By God Harrison, I will see you righted!” King George III subsequently arranged an independent trial for H5, Harrison’s last timekeeper. H5 was reported to have performed the trial superbly during 10 weeks of daily observation between May and July 1772. However, the Board of Longitude refused to recognize the King’s trial. Next the King helped the Harrisons appeal directly to the Prime Minister and to Parliament. Finally, on 21 June 1773, an Act of Parliament was accepted and recognized John Harrison as the man who solved the Longitude problem.

Given King George III’s passion for horology, it is interesting to speculate how the purchase of Breguet No. 1297 was initiated. Perhaps Recordon alerted the King to the fascinating new ‘whirling about regulator’ that Breguet had recently invented. As the only example known of this type with a thermometer, it is interesting to consider whether this was a particular request of the King himself. Certainly as a man of science, he would have appreciated not only the captivating action of the tourbillon but also the clarity and precision of the dial’s indications, as well as the ability to accurately time events via its special “observation seconds” dial.

No. 1297 created a sensation when it appeared for sale at Sotheby’s London from a private collection on 9 November 1999, prior to which it is believed to have been unseen in public since its inclusion in the exhibition “Five Centuries of Timekeeping” which was held at Goldsmiths’ Hall in London from 3 – 8 October 1955. The watch has been carefully stored since the Sotheby’s 1999 auction and we are delighted and honoured to offer this historic watch at auction once again.