A hand-written address book that lists details of Lewis Carroll’s closest friends and family provides a ‘treasure-trove’ of insights into the much-loved author’s life.

The plain brown exercise book, which features in The Library of an English Bibliophile Part VI sale in London on 20 October, includes a hand-written list featuring details of the people the author earmarked to receive a copy of The Nursery Alice, which was published in 1890.

The book, a new edition of Alice’s Adventures in Wonderland specially adapted for children under five, was released 25 years after the first ‘Alice’ book. In the century that has passed since, neither book has been out of print.

Dr Errington, Sotheby’s Specialist in Books & Manuscripts, explained why the address book is of such significance to the literary world, “We know Carroll sent out a number of presentation copies of The Nursery Alice, but until now we had little idea of who the recipients were. This is his master list, his special address book detailing his inner circle.

“Unknown to modern scholarship, it is a treasure-trove for researchers, with the potential to increase our biographical understanding of the author. The book is a fascinating snapshot into Carroll’s private life, and to see who he had stayed in touch with since the publication of Alice’s Adventures in Wonderland decades earlier.”

Of particular interest is entry number 34 - ‘Mrs Hargreaves’ [Alice Liddell], the inspiration behind the ‘Alice’ books. At that time in her late thirties and married to the cricketer Reginald Hargreaves, she was one of society’s most high profile hostesses. The copy is addressed to her home, Cuffnells in Lyndhurst, the New Forest.

The relationship between the Liddell family and the author is said to have suffered a sudden break in June 1863, shortly before the publication of Alice’s Adventures in Wonderland. There is no record of why the rift occurred and the single page in his diary covering the period is missing. Nonetheless, Alice and other members of her family received inscribed copies of The Nursery Alice in 1890.

Entry number 83 is ‘Miss M. Van der Gucht’ and this first edition of The Nursery Alice inscribed by the author sold at Sotheby’s in 2012 for £36,050. The printed dedication to Marie is hidden in the dedicatory verse 'A Nursery Darling'. The second letters of each line spell her name, Marie Van der Gucht.

The author has added the note ‘Morocco’, which is crossed through, next to several names in the list - a reference to special copies that he had wanted bound in white morocco leather. These morocco bindings were never produced, but they reveal a hierarchy within his list, denoting favoured recipients. While both Alice and Marie are marked to receive the special copies, interestingly Sir John Tenniel, the illustrator for both Alice in Wonderland, and The Nursery Alice, and the author’s family members are not.

The book was last seen 70 years ago when it formed part of the Eldridge R. Johnson collection and was sold in New York in April 1946.

As such the book has a highly distinguished provenance. Johnson (1867-1945) was a pioneer of the recording industry and at one time owned the original manuscript of Alice’s Adventures Under Ground. That manuscript was sold by Sotheby’s in 1928 and, re-appearing at auction in 1946, was bought by a wealthy group of American benefactors who donated the volume to the British people (and the British Museum, now British Library) in 1948 as a gesture of appreciation of Great Britain's part in the war of 1939-45.

The Library of an English Bibliophile Part VI sale is on 20 October in London. 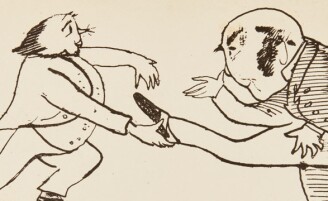